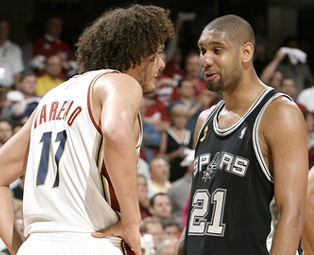 Tuesday! Or is it Wednesday? I’m not sure. I just know that three games are done, and we just need the Spurs to win one more game and I get to go home. I’m really hoping I’ll get to go home soon.

This morning I had to wake up early and do a radio interview, and the hosts apologized for waking me up so early. I pointed out that it was fine since I got to sleep through most of the game last night. No, it wasn’t a very exciting game. The highlight was definitely bumping into the Sternbot on the way to our seats.

I went over to practice this morning, which was depressing. The Cavs were all saying the right things — we’ve just got to play hard, anything can happen, we can play better, blah blah blah — but let’s be honest about this: there’s not much chance that the Cavs are going to win the NBA Finals. You can witness, you can believe, you can rise up, but you can’t beat the Spurs. Not this year.

With the Finals basically decided, unless LeBron and the Cavs can pull off the greatest comeback in the history of modern civilization, last night in the media hospitality suite I started coming up with people who should be considered for MVP of the Finals; basically, which people had the biggest impact on this year’s Finals without actually playing in the Finals?

I immediately came up with a few names and before long a bunch of media folk were throwing names around: Brian McIntyre, Baron Davis (knocked out the Mavs), Marc Iavaroni (didn’t keep Amare and Diaw on the bench), Amare and Diaw (for getting tossed), Flip Saunders, Stu Jackson. The list could go on and on. (And it continued going on and on this morning at practice while chatting with a few writers. I think someone you all should be reading on a bigger site is going to run with this idea and do a whole column on it.)

Anderson Varejao also merits a mention, because of that insane shot he threw up last night that drew nothing but glass. Why did LeBron pass him the ball? I think because Bron probably thought Andy would throw it right back to him. but he didn’t. Instead he took it upon himself to go one-on-one against Tim Duncan, which was a total disaster.

Who should really win the MVP? I think Tim Duncan will probably win it, but Tony Parker is just as deserving. He’s torched Cleveland’s guards again and again, plus he’s got one of the hottest chicks in the game wearing his chain. Last night a Spurs official I spoke with also nominated Bruce Bowen, pointing out he’s mostly contained LeBron and he will probably end up leading the Spurs in minutes played in the Finals.

But Parker hasn’t had much of an impact defensively — just because the Cavs guards can’t shoot doesn’t mean they aren’t getting wide-open jumpers — and Bowen’s contributions are probably a little too abstract. Duncan, however, is the rock for the Spurs, always there demanding double teams and more often than not scoring when they don’t double him. With each game he plays, Duncan cements his status as the best power forward to ever play the game.

Otherwise, things are slow here in Cleveland today. Sam and I ate lunch at the Hard Rock Cafe, mainly because we’d never been there before. It was totally unmemorable. Now we’ve got the rest of the day to kill. There’s a media barbeque somewhere tonight, but I’m not really fired up for that. We’ve reached the point where it’s all downhill from here. And I just want it to end. I was reading the game story in USA Today this morning and I read this quote from Duncan…

“It doesn’t change at all,” Tim Duncan said of the Spurs’ approach. “We need to get one more. That’s it…we’ll come out and try to finish it then. If it takes one or two more, we’re willing to do that.”

I read that and actually yelled, No! Not one or two more! One more, Spurs! Win this thing and let us all be free of these Finals. Would it be amazing if the Cavs came back and won four in a row? Yes it would, but I just don’t think it’s happening. These are San Antonio’s Finals. We are just witnesses.