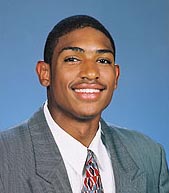 As hopeful as I was that the Hawks were going to get Amare Stoudemire, I hear it’s not happening. Chad Ford basically says strange estranged owner Steve Belkin vetoed the deal, but Sekou Smith says it’s just a case of things being even more difficult than anyone else let on — that they would’ve needed a fourth team to make it work. I was told tonight it’s still alive but the chances of it happening were less than twenty percent. (So you’re telling me there’s still a chance!)

Also, the Suns are saying that they’ve never had direct contact with the Hawks. Well, of course they’re saying that. Do you want them to admit that they were shopping Amare? You think he’d be happy with that?

Now, moving on to the Draft…

I’ve been beating the Yi drum for a while because I was told the Hawks owners loved Yi and that was the way things were going to go down, regardless of whom GM Billy Knight wanted.

Now the pick will be Al Horford, who Billy Knight loves, even though they drafted a power forward last year (Sheldon Williams). My main man Adrian Wojnarowski says there’s still a chance it could be Yi. Well, that’s not what I hear. It’s Horford. Billy has the power!

And with the 11 pick, if they don’t move it, they’ve got a deal for Luke Ridnour sitting there waiting for them to pull the trigger if they want him. We’ll see.

If it’s true that Belkin ended up vetoing the Hawks’ chances to bring in Amare, I’m going to sue Belkin. It’s late and I can’t run this rumor down right now. I’ll post something tomorrow when I hear more.

Oh, and finally, I heard a great story today — and it’s true, which makes it even better: A GM recently checked out Chad Ford’s mock Draft and my former nemesis C-Fizzle had this GM taking someone the GM had “never heard of.”