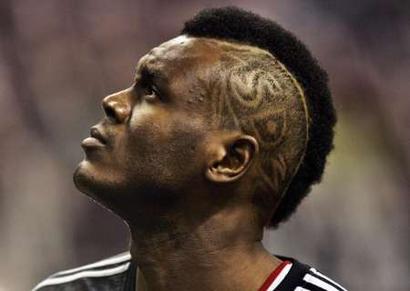 OK, so yeah, I didn’t exactly break down last night’s Hawks/Celts game in the evening wrap-up. That’s because the game broke me down. I thought we had a chance, but as soon as Knick Bavetta whistled that early bogus charge on Joe Johnson to send him to the bench with two fouls, I knew we were dunzo (because Mike Woodson would seemingly rather chop a finger off than allow a player with two fouls to sniff the floor during the first half). Josh Smith seemed to allow reality to catch up with him as well, and without any major contributions from Joe or Josh, the Hawks can’t beat a team like Boston.

I tried to do my part to support the Hawks. Russ, Khalid and Pascal came over to my place to watch the game last night. Russ wore a JR Rider Hawks jersey, and I started the game in a Josh Smith jersey, though when that didn’t prove fruitful, I switched to a long-sleeved Hawks t-shirt. When that didn’t work, I went to a 1987 Dominique Wilkins jersey to open the fourth quarter, and the Hawks immediately cut it to an 8-point lead. And then Boston blew it open again before I could find my Lou Hudson jersey. Considering I wore a Hawks hoodie all day and had a throwback warm-up jacket in reserve, perhaps I could’ve handled my rotation better. Then again, I thought mishandling my rotation would be a nice homage to Mike Woodson.

As a result of their visit, I did stumble across a redeeming quality relating to, of all people, Isiah Thomas. Pascal left behind a bag of this stuff, which must be sprinkled with crack. I have been eating it for the last three hours and it is amazing. Nice work, Isiah.

Anyway, about tonight…even though they fought it all the way, the Sixers finally took their medicine. I flipped over to the game at the end of the first quarter and Detroit was ahead 30-12, and they went on to win it 100-77.

Philly surprised a lot of people this postseason, including me. I knew they were young and had only recently coalesced, but I didn’t expect them to win even one game, much less two. I think the interesting thing about them is as good as they are, they still don’t have a stud scorer guy who can get you a basket in crunch time. Andre Miller is their best player, but to me he’s still a hair below being a marquee player, and Andre Iguodala, as good as he is, isn’t that guy either.

Do you need a guy like that? Maybe not to be a good team, but to be a great team I think you absolutely need that, someone who can dictate defenses and bail you out in crunch time. The question now is, Where does Philly get that guy? They don’t just grow on trees, and I don’t think they’ll be able to find one in the middle of the first round. Maybe Thad Young develops into their franchise guy while Andre Miller still has some tread left, but either way, for Philly to take that next step, one guy has got to step up and fill that void.

Detroit also surprised a lot of people this postseason, although I was not one of the surprised people. I’ve said for a while now that I think they’re going to the Finals, because they’re just too diverse to be stopped by anyone in the East. Billups can beat you, Rip can beat you, and occasionally, when the moon is in the proper stage, Rasheed can beat you, too. And Prince is no joke, either. I don’t think the Pistons will win a title this season because they’re just so maddeningly insouciant,  and Flip Saunders doesn’t seem to the be the person who can shake them out of that reverie.

That’s it for now. NBA Friday coming in a few hours…