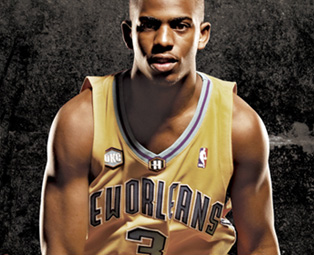 I’m glad that the Playoffs are not only exciting this season, but they also seem to be drawing attention from non-NBA viewers. Just got a press release from TNT that their numbers are up 25 percent with male viewers 18-34 years old. (That still doesn’t explain why they incessantly pimp “The Closer,” however.) There are a lot of fun young players that even a casual fan can tune in and appreciate. I was at a cocktail party/fundraiser last night here in NYC and ended up talking hoop with a Knicks fan who told me he hadn’t planned on watching the Playoffs until he happened to see a Hawks game and a Hornets game and found that he really liked the styles of play.

Why hadn’t he seen much of the Hawks or Hornets before? Because the NBA and their television partners (TNT and ABC/ESPN) haven’t done a very good job of publicizing the diversity of good teams throughout the NBA. Two of the East’s Playoff teams (Atlanta and Philly) went into the season with exactly 0 combined TV appearances scheduled. (Aside from the Playoffs this year, the Hawks haven’t been on national TV since 2003.) The Lakers, meanwhile, had 24 appearances. So did the Heat, maybe the worst team in the NBA this season. The Hornets? 2. Seattle? 8. Toronto? 1.

The lesson is that if you want free national publicity for your team, you better have some stars in your lineup. Who cares about stuff like wins and losses? The networks don’t care about good games so much as they care about big names.

And I know that SLAM can be guilty of this as well. People complain that we do the same covers year after year, and to a point they’re correct: There’s a handful of elite players that deserve covers and sell well, and we intend to keep those guys in the cover rotation as long as they’re playing well and their covers sell.

But we only do one issue every month or so. The networks have dozens of games. Even if they had Shaq and Dwyane Wade playing healthy all season long, did we really need to see Miami on national television 24 times this season? Fans aren’t stupid: They have the internet, they can get League Pass, they watch SportsCenter. They see plenty of the superstars. Maybe next year we’ll finally get to see some of the better young teams and budding rivalries.

I doubt it, but who knows?

• The first round finally came to an end yesterday, thanks to those strong, efficient Boston Celtics. I blame myself for not seeing that collapse coming because I didn’t watch enough Celtics games this season. So many other writers proclaimed their greatness that I took their word for it. Which I obviously shouldn’t have done.

Still, the Celtics advanced, meaning I went 8 for 8 with my first round predictions, which is better than every “stat geek” Henry Abbott recruited for his annual pick ’em contest. Of course, I didn’t use numbers and statistics to form my opinions — I just used my gut and my brain. So apparently, I am superior to numbers. I already knew that, but it’s nice to see the numbers finally giving up fighting me and just acquiescing to my knowledge. I hope next year The Abbott allows me in the contest so I can blow them geeks out of the water.

Now, let’s go through Round Two and I’ll try to extend my perfect streak…

Detroit/Orlando — Watching that first round series, it seemed to me that Orlando still needs another year and another veteran before they become genuine contenders in the East. Dwight Howard doesn’t have enough offensive skills yet, though it’s pretty amazing that he can put up more 20/20’s than Hugh Downs without a go-to move on the block. I think Tayshaun negates Hedo Turkoglu, and I think Chauncey’s too big for Jameer to stick with. The only thing that gives me pause in this series is that Detroit has that lazy streak that occasionally rears its ugly head. You know, the one that causes the Pistons to play like they’re all 55 years old and appear to have never touched a basketball before. I think a great coach sees that coming and would keep that from happening (or at least come up with some wacky motivational ploy to keep his guys more engaged). But Detroit doesn’t have a great coach, only a good coach. Still, Detroit takes this series.

Boston/Cleveland — I think a lot of this is going to come down to Boston’s ability to use their stars without wearing them out. Time and time again during the Atlanta series, KG, Pierce and Ray Allen were sucking wind, hanging on to their shorts for dear life to keep from keeling over. And then Doc would replace Kevin Garnett with Big Baby, which is like replacing Joe Johnson with me, and the Celts would lose their momentum. (Nothing personal against Big Baby — he’s just no Kevin Garnett. And I’m no Joe Johnson.) Atlanta was able to find success against Boston by doing two things: pushing the tempo and rotating the ball against Boston’s double-teams. I think we can assume that Boston will double LeBron the same way they doubled Joe Johnson, and I think LeBron will react similarly to JJ, backing the ball out and looking for the open guy. But, and Jeff Van Gundy also pointed this out yesterday, Atlanta got good mid-range shooting from their bigs (Al Horford and Josh Smith) in the games they won. Perhaps not coincidentally, Atlanta got terrible games from their bigs when they lost. So does Ben Wallace even play for Cleveland in this series? Does Cleveland go small and hope to survive Boston’s halfcourt game so they can get jumpers for Joe Smith/Wally Sexyback?

As good as Atlanta matched up with Boston, I think Cleveland is bad matchup for Boston. And I think Boston finally found their swag again. Celts win.

Los Angeles/Utah — I used to be a huge fan of the Jazz, until they signed Carlos Boozer. I have nothing against Duke players or men from Alaska or men with a lot of chest hair, but when they brought in Boozer, then drafted Deron Williams, they suddenly went from ordinary to extraordinary. Back when they were ordinary, they seemed to play harder and hustle a little more. Lately they seem just a touch more complacent. Meanwhile, LA is rolling right now. I don’t think Utah can handle all the different was LA can attack. I’m not sure anyone in the NBA can handle it, actually.

San Antonio/New Orleans — This is the puzzler to me. I know a lot of people were picking Phoenix to beat San Antonio, but I learned many moons ago that San Antonio plays their best in the postseason, when they seem to find an extra level of concentration and execution and surprise everyone by winning games nobody expects them to win. They always seem to fall behind, keep it close and then come storming back and win the game. That alone should make me pick the Spurs.

But I’m not going to pick the Spurs. I know, just one month ago I picked them to win it all, but I can’t shake this feeling that New Orleans is on a mission to surprise the NBA. The Spurs can’t handle Chris Paul, and David West will get his, but I think Peja Stojakovic is the key for N’awlins — if he’s knocking down outside shots it opens everything else up for the Hornets. The Spurs have had a nice run, but New Orleans is going to inject some new blood into things. I’m riding dirty with the Hornets.