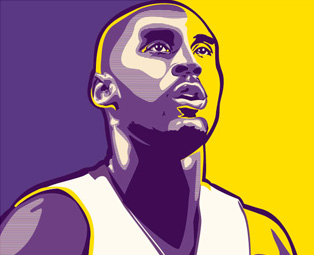 The other afternoon, after that lunch with the Chuckster and EJ and Kenny, after hustling into a cab back to the office, after spending an hour on an NBA TV production conference call as I wrote the post about lunch, while I was editing about a dozen stories for the new issue of SLAM, I realized that it’s time. My summer is over, and the NBA season is upon us, which leaves me grasping for any semblance of free time like I was Larry David falling off a roof.

I mentioned last week that I’d decided that this was going to be a Kobe Bryant breakout season, and if anything, that thought has only strengthened over the last week. (By breakout, I mean I think he’s going to close that gap between him and LeBron in the best player in the League discussions. And I think he’s on track for the MVP, which I wrote in SLAM 133.) Five quick reasons why I think Kobe is due for a huge season, maybe his biggest ever:

1) It cracks me up every time I hear someone argue that Ron Artest is a step down from Trevor Ariza. Really? Really? There’s a reason Trevor Ariza has been on four teams in four seasons. With the Lakers, he found a perfect fit as a complementary player, more importantly, in a system that played up his strong suits and downplayed things he can’t do (like dribbling).

When I was out in Vegas I got to spend some time chatting with Andrew and Brian Kamenetzky, who blog about the Lakers for the LA Times. They mentioned seeing a play in a preseason game where Artest caught the ball at the top of the key, dribble-drove to his left and got right to the rim. It was the kind of play Ariza never was able to do, but the kind of play Artest makes regularly, the kind of play that will make the Lakers a better team. And the people who say Ariza was a great defender? Well, paging Ron Artest! Defense aside, the more offensive weapons Kobe has playing alongside him, the more space that is opened for Kobe. I know Artest has always been more and more prone to force shots throughout his career, but, especially in Sacramento and Houston, Artest was usually the best perimeter player on his team. Playing within the triangle should give him structure, as should being lined up next to Kobe and Odom and Gasol and realizing he doesn’t have to do everything on his own anymore.

2) He’s healthy, at least as healthy as he’s been in a long time. No summer hoops, no surgeries, no court cases. Which meant…

3) Kobe spent the summer working on his post game, at some point connecting with Hakeem Olajuwon. The more dangerous his post game is, the more defenders have to help on him, the more open jumpers for everyone else.

4) The Lakers play 17 of their first 21 games at home. They get that familiarity, get to sleep late, eat at home…and Kobe gets to feel comfortable.

5) Most importantly, to me, nobody is talking about Kobe right now. At that TNT lunch the other day, do you know how much we talked about Kobe? We didn’t. Seriously, I can’t remember Kobe being mentioned at all, other than vaguely and in passing.

It’s strange to think of Kobe as being under-noticed, but if anything, that’s what’s been going on the last two months. While everyone talked about Ron and about Lamar and Khloe, Kobe was putting in work.

Nobody’s concentrating on Kobe right now, and that’s not something Kobe likes. How does he get all eyez on he? Play dominant basketball.

• I know that there are many people these days who massage numbers and statistics in order to try and predict the NBA standings. Well, when writing the annual SLAM NBA Preview, I don’t. Instead, using an unusual mixture of accumulated intelligence and insight gleaned from people who both cover and work with these teams and players, I have made my annual predictions in SLAM 133 (on sale now!). And now, presented totally without context (of which there is plenty of within the actual magazine), here’s how I project this season’s final rankings:

That’s it. Catch you guys next week.