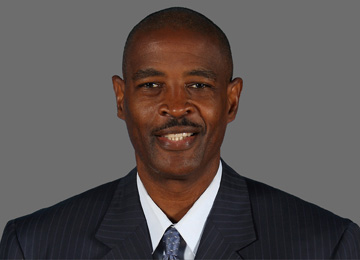 Over the weekend, the Hawks surprised a lot of people by selecting Larry Drew as their new coach. Drew has been the lead assistant under Woodson the last six years, and before that he coached with the Lakers, Pistons, Wizards and Nets. He played a decade in the NBA as a point guard, and his son, also a point guard named Larry, is currently heading into his second season at UNC. Yet for

all his hoops pedigree, however, Drew had never been a head coach. Until today.

When Woodson was released in Atlanta and all those other names were tossed about, one NBA player who’d played under Coach Drew asked me why Drew wasn’t being considered for Atlanta’s top slot. He’d put in the time, he was respected by the Hawks players — Why shouldn’t Larry Drew have a chance to run the show in Atlanta? As it turns out, he was being considered, just not as loudly as some of the other candidates. Sound and fury are great and all, but Hawks fans are looking to Coach Drew to signify something.

And now’s his chance. I spoke with Coach Drew earlier today before his introductory press conference this afternoon…

LARRY DREW: Thank you, I really appreciate that.

SLAM: So as a first-time head coach, what’s the first thing you’re going to do? Do you start putting together a playbook? Do you call the players?

LD: The first thing, I gotta put a staff together. That’s number one, and that process will probably start this week, I’ll be interviewing some guys this week.

SLAM: I’m sure this whole process — being in the situation you’re in right now — is something you’ve been dreaming about for a long time?

LD: Yeah, yeah. I mean, I’ve always had aspirations to be a head coach. I think it goes all the way back to my early years of coaching when I was with the Lakers. And I actually had an opportunity when I was there, but it didn’t pan out. I guess it was just wishful thinking that hopefully one day it would happen. Later I started coming to the realization that there are guys who have been coaching just as long as I have who’ve never gotten that opportunity. I just said I’d keep grinding and grinding and grinding at it and hopefully it would happen. Lo and behold, I finally got that opportunity.

SLAM: Having been there the last six years and seeing this team develop, do you see the same things that could use improving upon that a lot of the fans and media sees and has talked about the last few weeks?

LD: Well, I think your normal basketball fan can look at our team and pretty much analyze it. If you listen to commentators and radio shows and whatever, everyone’s saying the same things need improving upon. Certainly I recognize and our team recognizes it. I think these guys are itching to get over that hump. We’ve shown and proven we can make the Playoffs, it’s a matter of elevating our games to make it to that next level.

SLAM: How do you as head coach get the players to buy into that?

SLAM: But at some point don’t you have to get them to understand, OK guys, this is all great and stuff, but you’ve got to share the ball on offense?

LD: That’s part of looking at our team and seeing what some of the issues are that have slowed us down and kept us from making that next big jump. Offensively, a lot of people are seeing the same thing. When you have five guys out there playing together, five guys out there moving the basketball, and five guy out there who are a threat, you become a much more potent team, and that’s something that I’m definitely planning on implementing, so we can have all guys out on the floor being a threat. Not all five guys necessarily being scorers, but all five guys being a threat. We have the capability of obviously Joe having a big night, or Josh Smith or Al having a big night, even the capability of Marvin having a big night. And Jamal coming off the bench is obviously a guy who can score in bunches. We just want to add a few things, subtract a few things just to make us a better ballclub.

SLAM: And where does Jeff Teague fit into all of this?

LD: Jeff is a kid that first of all, I really love his talent and his skill level. I think he really has the ability to make our team better, and it’s going to be my job to put him in that position. I’ve seen a lot of point guards, and I’ve played against a lot of them, and this kid, he has the ability. It’s just a matter of him going in, being confident and playing at a high level.

SLAM: Do you have any plans to shave your eyebrows or anything?