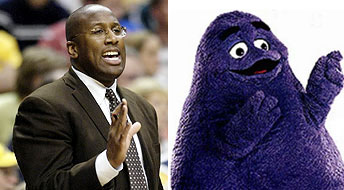 Finally, I’m back. And I have about 100 emails and voicemails to get to get at. So if you’ve been trying to track me down lately, please bear with me. Spending a long time watching the Cavs will cause irreparable mental trouble to even the strongest of us. Sam and I saw this firsthand when a broken and battered Stephen A. Smith stopped by our table at breakfast on Friday morning. Even the irrepressible Stephen A. was struggling to make sense out of what we’d all just witnessed.

Were the Cavs really that bad? Yes, yes they were. And the moment I was sure that they were terrible came with a few second left in the first half of Game Three. I wrote about this in the game notes at the time, but I can’t get it out of my head. Cleveland and San Antonio had scuffled through the first half, but the Cavs were mostly clinging to a slim lead. Robert Horry drained a three with 26.2 seconds left to tie the game at 38. And that’s when the Cavs crumbled. Let’s take this in stages…

1. OK, so there’s basically 26 seconds left in the quarter and Cleveland has the ball. What do you do? You can’t play two-for-one there and realistically expect to get a good shot off or get the ball back with any time left. Instead you should probably let the clock run as low as you can and take a shot as the clock hits 2.6, right? That way if you miss the shot the rebound and scramble will probably use up the rest of the clock, and if you make it you’re not leaving the Spurs much time. Either way, at the very worst the Cavs should go to the locker room tied at 38.

2. The Cavs called a timeout before this play, so presumably they discussed their options during the stoppage. Did the Cavs put LeBron into the game for a last-second shot? No, they did not.

3. Out of the timeout, the Cavs ran a pick-and-roll featuring Boobie Gibson and Drew Gooden, a loopy guy and a guy with a loopy name. Gibson managed to briefly break free, and he charged to the basket and threw up a shot that clanged off the bottom of the rim. The Spurs grabbed the rebound…WITH 12 SECONDS LEFT ON THE CLOCK! That’s not only bad clock management, it’s just completely inexcusable by the Cavs coaching staff.

4. San Antonio came back down the floor. Now, the Cavs had a foul to give, and Mike Brown was yelling for the Cavs to foul. So they did. Donkey Jones grabbed someone WITH OVER 7 SECONDS LEFT ON THE CLOCK! Look, I understand giving the foul there, but again, you can’t leave the Spurs that much time on the clock.

5. The Spurs threw it in, cleared it out and watched as Tony Parker flew around Daniel Gibson for a runner that dropped just as the buzzer sounded. 40-38, Spurs lead at the half.

It was a 4-point swing there that silenced the crowd, and the Spurs never looked back. The Cavs were giving away points like candy throughout the series. For all the talk about them being a really good defensive team, I never saw it. Maybe they’d just played a lot of games against Eastern Conference teams.

Are the Spurs a dynasty? Yes. But I don’t think they’re one of the greatest dynasties in NBA history. They have a tendency to play to the level of their opponents, so perhaps they’re too reactionary to be a great, great team. When I think of the greatest teams in NBA history, I immediately think of the old Celts, and more recently the Celts/Lakers from the ’80s and Bulls of the ’90s. All of those teams made you play their style. The Spurs don’t really do that, though, instead kind of conforming to what you do and just doing it better than you do it.

Also, a word to Mike Brown, who has been treated more like Charlie Brown by the fans and media. Yes, he made some questionable decisions along the way, but didn’t he get the Cavs to the NBA Finals?

Next week we have the NBA Draft, and I have no idea what the Hawks are planning on doing. A few weeks ago I heard they were all hot on Brandan Wright, then this week I heard Billy Knight likes Yi Jianlian. So I don’t know where they’re going with these picks. I do know that I have zero trust in Billy Knight to make the right decisions. Prove me wrong, Billy!

Also, coming up tomorrow we’re going to kick off a very cool Draft-related contest. And then on Friday we’ll announce the 2006-07 SLAMMYs. Get your tuxes pressed and all that stuff.

Right now we’re in the midst of getting SLAM 111 all finished up and out to the printer. I have stuff to write, stuff to edit, stuff to read. So real quick, a few links…

• If you haven’t signed up for the Mountain Dew contest on our homepage, go win yourself a free bike. Russ, this has you written all over it. But maybe you’re not eligible? I dunno…read the rules or something.

• Quite possibly the greatest news ever. Not sure what’s better, the return of Mr. Chibbs or that Freedom Williams owns a CBA team.

• Speaking of The A, I’ve been kind of passively looking for this music video forever and last night I finally stumbled across it. One of my favorite hip-hop videos and songs of all time.

• Guess who wrote this:

“Nowhere else can you rip off some huge farts and have 3 nurses and a doctor, while maintaining a very professional demeanor, tell you that you aren’t done yet and demand that you let loose a few more.”