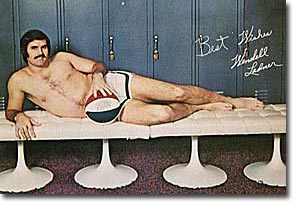 Monday! And we’ve got game notes coming out of our nose. Check out the front of the site for field reports from Kobe’s visit to New Orleans, the Mavericks in the ATL, and Melo and AI in Toronto. All great stuff. And I know we don’t say this nearly enough, but thanks again to all our writers who help keep SLAMonline.com on top.

Watched a lot of the NCAA Tournament this weekend, and guess which Final Four team I like? Georgetown. I’m not saying I like them to win it all, but I like the way they play. They set picks, they dive to the rim, they switch up their defenses, they make backdoor bounce passes — a fun team that seems to at least have a cursory understanding of basketball. And Roy Hibbert is hilarious to me. He’s out there playing hard, laboring up and down the floor, but he’s still just a bit shy of being coordinated. Can’t count how many times yesterday he accidentally crashed into guys. I still think Florida is the team to beat, mainly because of their experience.

Meanwhile, I’m totally into Kobe; he’s just not that into me. I wrote about it today for SI.com. You watch enough games where Kobe’s out there firing away, and before long you get sucked into it. You start to believe Kobe can make any shot he takes, and you start rooting for him to shoot over double-teams. It’s really addictive. Can’t wait for tomorrow night’s game against the defense-less Grizzlies.

A few things worth reading…

• Quotes of the Day:
“Everything I do, everything I say, I keep everything in perspective. The way I think, I think logically. One thing I’ve learned in life is that you cannot deny logic.” — Mike James, on his SLAM advice column.

“As of right now, I’m a Net, I will always be a Net. We’ll just go from there when it’s time.” — Vince Carter, on the possibility of leaving New Jersey via free agency. So he’s a Net, always but not always. Got it.

• This whole Ron Artest story really is amazing. One day last week, Ron Ron decided he was going to retire after the season. So he sent a text message to all his teammates informing them of his plan. This is next level stuff here. There’s also talk of Ron going overseas to play for two years until things settle down here in the States, then returning to the NBA. Like Michael Corleone.

• Mike James on his SLAM advice column. Some of his answers in that link should explain why we wanted Mike to do this column.

• A man with $38 billion cash in the bank sat courtside at the Cavs/Nuggets game. LeBron is his Anna Nicole Smith. Or something.

• Fun police alert! The NBA has asked Gilbert Arenas to stop having so being entertaining and making the NBA interesting.

• The Grizzlies are starting a campaign to help Rudy Gay win Rookie Of The Year. Probably a wise idea to use his first name and call the campaign “Rudy Air,” instead of, well…

• Kenyon Martin is changing numbers next season, going from number 6 to number 4, which he wore in college. He said 4 was taken when he joined the Nets out of Cincinnati back in the day. I just looked it up, and the Nets actually have retired number 4 in honor of…Wendell Ladner! Never heard of him either. Sounds like quite a character.

• When Josh McRoberts was thinking about leaving Duke early and going pro, did he call Carlos Boozer or Elton Brand, former Blue Devil big men? No, he got advice from JJ Redick! Who was probably all like, “It’s free money man! You don’t even have to do anything! Come on in!”

• Tracy McGrady’s back is fine, but now he’s got the flu. Someone get this man some Airborne, please.

• And finally, the Knicks have signed Randolph Morris to a two-year deal. I hear that Josh Smith is always raving about Morris (they played AAU ball together), but if this is the same Randolph Morris who didn’t do much at Kentucky the last year or so, seems like a superfluous signing to me. Don’t they already have Jerome James?