Links: So I Got A Book Deal… 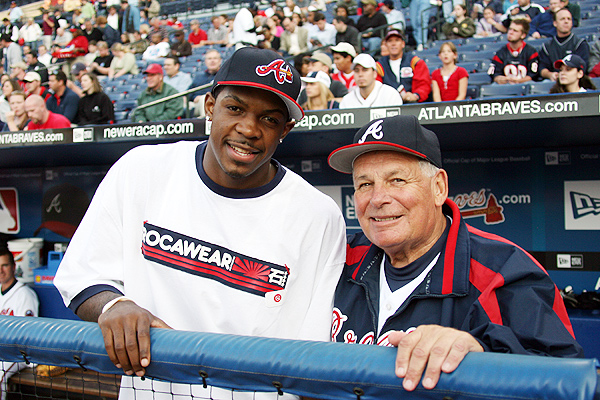 Lots to get to today, but first I get to lead today’s Links with an announcement about something that’s been brewing for about a year.

I just wanted to let you all know that I signed a book deal which was announced today. And it’s a book about…not basketball. Baseball, actually. Which I’ll explain momentarily.

First, here’s the official news from the publisher:

From Lang Whitaker, the executive editor of SLAM magazine and a contributor to SI.com, SEARCHING FOR BOBBY COX, a humorous, thoughtful, and knowledgeable fan’s memoir of following manager Bobby Cox and the Atlanta Braves for the past two decades, to Brant Rumble at Scribner by Alison Schwartz at ICM.

OK, so why a baseball book? A couple of reasons: One, I write about basketball pretty much all day, every day, and if I’m going to be staying up all night for the next

year to write a book, I’d rather not be writing about basketball all night, too. Two, while the Hawks are my favorite basketball team, the Atlanta Braves are my favorite baseball team, and I think the two of them are neck-and-neck as far as favorite of all-time. Third, according to pretty much everyone I talked to, baseball books tend to sell better than basketball books, at least for first-time authors. (Although if this book does well, I’d love to do a hoops book next.) And fourth, I just thought it would be fun to write a book about the Braves. Pretty much every basketball-related thought I have gets fleshed out and written down somewhere, but the baseball stuff is all floating around in my head.

So…I’m pumped, and I honestly believe there’s not a better book editor for me to be working with than Brant, who’s probably best known for his work with writers like Chuck Klosterman and Rob Neyer, and he’s also worked with some guy named Stephen King, among others. (And I totally didn’t just write that paragraph because Brant asked me to send him the link to this post.)

I’m still going be at SLAM full-time, still writing for SI.com, still doing stuff for hawks.com. I’m just going to be sleeping a lot less for the next year. I actually yawned as I typed that sentence.

This whole thing was not an easy process, and I learned the value of patience and letting things sorta work out on their own. I think the book should be out Spring 2010. (Believe me, you’ll know when it’s out because I’ll be asking each of you to buy about a dozen copies.)

Until then, I guess I have to write a book. And I just wanted to thank all of you for your friendship and readership and support.

Moving on, I closed the comments for our Gunnin’ For That #1 Spot DVD giveaway. I tried to read through there quickly and find a few winners, but there’s no reading those comments quickly — way too much good stuff in there. I’ll go through them all his afternoon and we’ll announce the winner tomorrow.

Let’s get to some Links…

QUOTE OF THE DAY

“We were looking for a good place for our opponents to stay and the Fairfield Inn not only meets, but exceeds my expectations.  We are very excited that they offered to be the Bison’s sponsor for hotel accommodations.  I can only hope that when we travel to play our away games that we can stay in a hotel of this quality.” — Jay Sills, CEO of the ABA’s Kentucky Bisons.

• I was going through the ABA website and came across this great press release, which is where today’s quote of the day came from. That press release not only meets, it exceeds my expectations.

• Hey, at least Jamaal Tinsley’s staying busy. Then again, combating image problems by hosting after-parties might not be the best idea.

• Remember all the stories about how JR Smith was going to grow up this season? Not so much. And I love Karl’s quote on Ruben Patterson.

• I‘ll be honest, I didn’t even know the L-Wolves had signed David Harrison. Somehow that’s just…perfect. (Plus, Kevin Love fouled out in 11 minutes?)

• One of my favorite sites to check out the last few months has been Nate Silver’s fivethirtyeight.com, a blog where the guy known for writing about baseball stats has been projecting election results with remarkable accuracy. I sent the link to Ben about a month ago, and since then this site’s been showing up all over the place in the media. But once the election’s done, what’s next? I’ve got it: Put Silver in charge of the BCS. Seriously.

• I hope The Landlord was renting in Sacramento — looks like Shelden Williams will not be getting a contract renewal from the Kings.

• And finally, there will be no Disaster in Orlando.