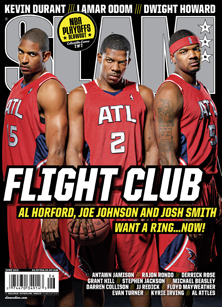 The toughest thing about seeing the Hawks get drilled by the Magic in the Eastern Conference Semifinals, was remembering that it’s the Eastern Conference Semifinals. I felt sick last night, upset that the season, which had such promise and so many great moments, ended with such a thud. I had to take a step back and remind myself that the Hawks are still a work in progress, that rebuilding doesn’t happen overnight.

Look, the Magic are 31-5 in their last 36 games. (You didn’t realize that, did you?) The Magic are hotter than hot right now and just rolling teams. Charles Barkley said last night that the Hawks getting drilled by the Magic wasn’t Mike Woodson’s fault — paraphrasing here, which is a dangerous thing to do to Chuck’s words, but he basically said the Hawks just didn’t have enough good players to beat Orlando. Maybe he’s right.

Counting the preseason, Orlando was 4-1 against the Hawks coming into the Playoffs, winning by an average of 26 points. In four games in the Playoffs, Orlando beat Atlanta by an average of 26 points. The Magic handled Atlanta all season, and last season too. Look at all the moves Orlando and Cleveland made last summer. The Hawks? They traded for Jamal Crawford, who helped them win six more games than they won last season. And they went hard after Joe Smith, signed him, and then played him a total of five minutes in the entire Orlando series.

Maybe the Hawks didn’t have enough good players to beat Orlando four times in seven games. After all, as of now, Orlando’s won 28 of their last 31, they’ve won 31 of their last 36, and they’ve won a total of 14 in a row. They’re the best team in the NBA. But losing four times by an average of 26 points per game? Well, it doesn’t reflect well on the Hawks players or Mike Woodson.

And starting right this minute, there are two huge decisions the Hawks need to make:
1) Do they re-sign Mike Woodson?
2) How much is Joe Johnson worth?

I’ve been saying all season that there’s a distinct possibility Mike Woodson is the type of coach who can get you from 13 wins to 53 wins, but maybe he’s not the coach to get you from 53 wins to the top of the Conference. Maybe a new voice in the locker room could motivate some of the guys to play more consistently, and even galvanize the fans in Atlanta. For a lot of the Hawks players — Josh Smith, Marvin Williams, Al Horford, Jeff Teague — Woodson’s the only NBA coach they’ve ever had. I like Woody, and I admire his single-minded focus on defense. But a new voice in the locker room (and a new philosophy on the court) could be a relatively inexpensive way for the Hawks to re-energize the entire franchise.

As for Joe, I’m not sure he’s going to get a max contract from any NBA team. He’s 29 years old, didn’t have an incredible Playoffs, and with so many owners struggling to turn a profit, I’m not sure a basement-dwelling team will want to make that significant of an investment.

If it was a team that played tough defense and shared the ball and had Joe coming off picks to shoot jumpers? Yeah, maybe Joe could be the best, or one of the best, players on that team. Assuming that’s what Joe wants to do. For the last five years, Mike Woodson’s basically given Joe free rein to do whatever he wants to do on offense, or at least it would appear this way. Maybe Joe wants to go play somewhere where he can continue to be The Man and have the ball in his hands all day on offense. There are teams out there who would consider this an upgrade to their current offense, and after all, the Hawks did manage to win 53 games this year with Joe creating his own shot most of the time.

Joe was Atlanta’s highest-paid player at almost $15 million this season. And to me, that seems about right. He’s a very, very good player, but not a max contract player. The Hawks supposedly offered him $16 million a year last summer, and he turned that down. This time it might seem more realistic.

Besides those issues, there are a couple of other spots the Hawks should upgrade. Most importantly, the Hawks need a point guard. Mike Bibby is now, physically, a back-up point guard, and he’d be a great back-up for the Hawks, logging 12-15 minutes a game. Bibby basically makes the mid-level next season, so his salary isn’t outrageous, and he’d be a nice spot-up shooter, almost like Derek Fisher. But I can’t remember the last time I saw Mike Bibby drive to the basket and shoot a lay-up. Without that threat, teams were able to pressure Bibby the entire game, not to mention single-cover him and take advantage of him defensively. Again, he’d be a tremendous bench player, but the Hawks have to upgrade at the 1. The Hawks could also use a perimeter defender, someone like Raja Bell, who was on the radio in Miami yesterday basically begging the Heat to sign him. I’d take him in a heartbeat to provide the same kind of toughness Matt Barnes gives Orlando. And don’t forget the Hawks also still have the rights to a certain SLAM columnist named Josh Childress, who’s team just lost in the Euroleague Championships.

Hawks GM Rick Sund has a lot to think about. I don’t think the Hawks need an extreme makeover, but it’s no secret that the Hawks have hit some sort of plateau, and something’s gotta give. Of the eight teams that made the Conference Semifinals, seven of them were in the NBA’s top ten in salary. The Hawks were 22nd. The Hawks have done a remarkable job of rebuilding without getting stuck under a lot of terrible contracts. But at some point, if they really want to be able to compete with the NBA’s upper echelon, they’re going to have to spend some money. That doesn’t mean they should be irresponsible with it, but basically, if the Hawks don’t do something this summer, they’re just treading water.

And in the NBA, if you don’t try and make your team better every chance you get, you lose.