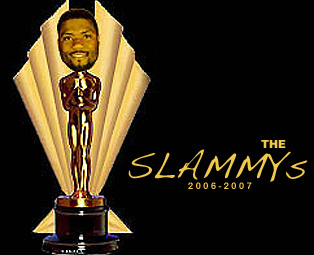 Coming to you live from the SLAM Dome, it’s the 2006-2007 Slammy Awards! These awards recognize achievement — both personal and professional — in the world of the NBA over the last season, and we here at SLAM are just glad that we can be a part of the greatest show on earth, the NBA (even if the NBA doesn’t ask us to vote in the official postseason awards — not that we’re complaining!).

Now, on to the show…

The Marmaduke Award
FOR: The biggest dog in the League, the guy making lots of coin but not worth a friggin’ cent.
SPONSORED BY: Antoine Carr and Glenn Robinson
2002 WINNER: Austin Croshere
2003 WINNER: Vin Baker
2004 WINNER: Tom Gugliotta
2005 WINNER: Penny Hardaway
2006 WINNER: Brian Grant
RUNNERS UP: Jalen Rose, Brian Grant, Austin Croshere
2007 WINNER: Steve Francis
I hate to do this, since Stevie is such a nice guy, but he made over $15 million this season and ended up playing just 44 games. Just a few years ago he was on the cover of the SLAM NBA Preview issue. Now we probably wouldn’t even do a feature on him. He’s said his knees are shot, and I hope that whatever’s ailing him, he gets it together for next season.

The Allan Houston Award
FOR: The alleged superstar who puts up decent numbers but doesn’t justify his pay and rarely come up big when it counts.
SPONSORED BY: Allan Houston, of course.
2002 WINNER: Allan Houston
2003 WINNER: Alonzo Mourning
2004 WINNER: Shareef Abdur-Rahim
2005 WINNER: Chris Webber
2006 WINNER: Steve Francis
RUNNER UPS: Chris Webber, Mike Bibby
2007 WINNER: Jermaine O’Neal
Jermaine hasn’t done anything wrong, technically, and he averaged 19 and 9 this year, but he hasn’t played over 70 games in three years, and he still hasn’t established himself among that top echelon of NBA guys. The clock is ticking, homey.

The LVP Award
FOR: The allegedly important player whose absence least affected his team.
SPONSORED BY: Patrick Ewing
2002 WINNER: Vince Carter
2003 WINNER: Dikembe Mutombo
2004 WINNER: Allen Iverson
2005 WINNER: Steve Nash
2006 WINNER: Amare Stoudemire
RUNNER UPS: Baron Davis, Peja Stojakovic, Michael Redd
2007 WINNER: Joe Johnson
J-Double is my man, but he wins this one hands-down since the Hawks stunk with him and stunk without him. Not his fault, really, but hopefully Joe understands he’s joining some great company with the previous winners of this award.

The Glue Guy Award
FOR: The guy who needs to be taken out to pasture and turned into Elmer’s.
SPONSORED BY: Charley Rosen
2002 WINNER: Dikembe Mutombo
2003 WINNER: No Award Given
2004 WINNER: Dikembe Mutombo
2005 WINNER: Kevin Willis
2006 WINNER: Jerome James
RUNNER UP: Dikembe Mutombo, Ha Seung Jin, Joe Smith
2007 WINNER: Michael Olowokandi
About five years ago, The Kandi Man had what everyone thought was a breakout season with the Clippers. We did a feature on him in SLAM that summer, and I caught up with Kandi in his adopted home of London, where I rode in his Aston-Martin and went shopping with him. A female friend of his picked up his Clippers jersey and put it on, and Kandi said she looked “like Oliver Twist,” making him the first and last player I’ve ever heard drop a Dickens reference. Great guy, just not much of a basketball player.

The Brown Mic Award
FOR: The worst NBA announcer
SPONSORED BY: TNT, ABC, ESPN
2002 WINNER: Kevin Harlan
2003 WINNER: Tim Hardaway
2004 WINNER: Kevin Harlan
2005 WINNER: Tim Legler
2006 WINNER: Jim Barnett
RUNNER UPS: Chuck Swirsky, Eric Reid, Matt Devlin, Mike Rice
2007 WINNER: Brent Musberger
To be honest, I’m not sure what Brent Musberger’s official role is with NBA games on ESPN, but I know that occasionally I’ll flip on a game and there he is, attempting to artificially inject excitement into contests and trying to sound all folksy. I think this is done to hide a lack of general NBA knowledge. It just makes me change the channel.

The Yellow Pen Award
FOR: The worst NBA writer of the year
SPONSORED BY: ESPN.com
2002 WINNER: No Award Given
2003 WINNER: Charley Rosen
2004 WINNER: No Award Given
2005 WINNER: Chad Ford (lifetime achievement)
2006 WINNER: Various Knicks beat writers
2007 WINNER: Everyone who hated on Las Vegas after All-Star
After everyone escaped from Las Vegas following All-Star Weekend, several writers decided to hop on a bandwagon and declare Vegas a disaster and a mess. People complained that there were too many “thugs” in Vegas — what, you want the city to build a wall and keep people out? They wrote that the city did a bad job of keeping the airport under control — the city doesn’t run the airport in Vegas. They said traffic was horrible — I’ve been to a bunch of All-Star Weekends and traffic is always a mess. Vegas may not have been the best-run All-Star Game in history, but it was the most fun All-Star Weekend I’ve ever attended.

The Charles Oakley Lifetime Achievement Award
FOR: The player who night in and night out tries to prove that he’s utterly, completely insane.
SPONSORED BY: Dennis Rodman, Art Long
2002 WINNER: Ron Artest
2003 WINNER: Ricky Davis
2004 WINNER: Gilbert Arenas
2005 WINNER: Stephen Jackson
2006 WINNER: Danny Fortson
RUNNER UPS: Danny Fortson, Ron Artest, Gilbert Arenas, Stephen Jackson
2007 WINNER: Kobe Bryant
Come on now. After his John Kerry-worthy flip-flopping the last few weeks, could this go to anyone else? Should anything keep Kobe from fulfilling his duties as The Charles Oakley Award Winner, the first runner-up is Danny Fortson. Not only did DF manage to work a deal with the Sonics that allowed him not to travel to road games, but toward the end of the season he got a doctor’s note excusing him from flying with the team because his dentist said he had a bad tooth that would explode in high altitudes. Greatest doctor’s note ever?

The J.R. Rider Memorial Award
FOR: The player most committed to chemical warfare.
SPONSORED BY: John Lucas, Method Man, Redman
2002 WINNER: Lamar Odom
2003 WINNER: Rasheed Wallace
2004 WINNER: Damon Stoudamire
2005 WINNER: NONE
2006 WINNER: Chris Andersen
RUNNER UPS: Barry Bonds, JR Rider
2007 WINNER: Lindsay Hunter
The good news is there’s not a lot of guys getting in trouble for drugs anymore — what do you think this is, the NFL? The bad news is Pistons guard Lindsay Hunter had to serve a 10 game suspension after testing positive for using a banned diet supplement. Hunter claimed he thought he was taking cold medicine. Yeah.

The Rockafella Award
FOR: The team of the year.
SPONSORED BY: Nas
2002 WINNER: Tie between the Mavs and the Nets
2003 WINNER: Detroit Pistons
2004 WINNER: Minnesota Timberwolves
2005 WINNER: Phoenix
2006 WINNER: Detroit
RUNNER UPS: San Antonio, Detroit, Phoenix, Golden State
2007 WINNER: Dallas
Yes, they crapped the bed during the postseason, but they were far and away the best team in the League during the regular season, winning 67 games. This is an award for regular season achievement only. That they got drilled by Golden State matters not. Also, that Golden State turned into an exciting team for about 6 weeks toward the end of the season gets them an honorable mention, but they only won two more games than they lost during the regular season.

The Enron Award
FOR: The worst owners in the League.
SPONSORED BY: Quicken Loans
2002 WINNER: Tie between the Hornets and the Knicks
2003 WINNER: Los Angeles Clippers
2004 WINNER: Phoenix Suns (Jerry Colangelo)
2005 WINNER: New York Knicks (Cablevision)
2006 WINNER: New York Knicks (Cablevision)
RUNNER UPS: Atlanta Hawks (Atlanta Spirit), New Orleans/Oklahoma City Hornets (George Shinn), Minnesota (Glen Taylor)
2007 WINNER: Seattle Supersonics (Clay Bennett)
I can’t fault Bennett for hiring Sam Presti away from the Spurs to become Seattle’s new GM, because I feel it’s almost always better to take a chance on someone than just succumbing to the stat quo and hiring another retread off the former GM pile. But for the fans of Seattle hoping their Sonics manage to stay in Washington, Bennett has been a nightmare, publicly courting other cities and arenas. Not cool.

The Tuna Award
FOR: The best coach of the year.
SPONSORED BY: Bill Parcells
2002 WINNER: Doc Rivers
2003 WINNER: Gregg Popovich
2004 WINNER: Jerry Sloan
2005 WINNER: Nate McMillan
2006 WINNER: Gregg Popovich
RUNNER UPS: Flip Saunders, Lawrence Frank, Sam Mitchell, Avery Johnson
2007 WINNER: Don Nelson
It takes a special kind of person to publicly blast a few of your players, agree to trade half your team at midseason, regularly bring beers to the podium during postgame press conferences, and then, with a few weeks left in the season, decide to just screw it and go with a lineup of all guards and forwards. And then to knock off the best team in the NBA in the first round of the Playoffs, well, that took moxie. Which Nellie has in bundles.

The Tark in San Antonio Award
FOR: The worst coach of the year.
SPONSORED BY: Bob Weiss
2002 WINNER: The Rev. Dr. Isiah Thomas
2003 WINNER: Terry Stotts
2004 WINNER: Scott Skiles
2005 WINNER: Brendan Malone
2006 WINNER: Sam Mitchell
RUNNER UPS: Mike Woodson, Terry Stotts, Mike Brown
2007 WINNER: Tony Barone
He made the Grizzlies a fun team to watch, but he also took them from being one of the best defensive teams in the NBA to the worst defensive team, which is a pretty amazing feat to pull off. They also finished 45 games out of first place in the Western Conference, which is a staggering amount. Hey, how’d that tanking work out for ya?

The Chilling List Award
FOR: The player who has spent the most time on the bench this season.
SPONSORED BY: Grant Hill
2002 WINNER: Rafer Alston
2003 WINNER: Danny Fortson
2004 WINNER: Darko Milicic
2005 WINNER: Darko Milicic
2006 WINNER: Channing Frye, David Lee and Nate Robinson
RUNNER UPS: Hassan Adams, Pat Burke
2007 WINNER: James Singleton
This Clips newcomer managed to play in 52 games this season but averaged just over 7 minutes per game. Singleton brings hustle and desire to games. The Clips had neither this year. Hmm…

The Master Lock Award
FOR: The best defensive player in the L.
SPONSORED BY: Master P, The Lox
2002 WINNER: Bruce Bowen
2003 WINNER: Ben Wallace
2004 WINNER: Ron Artest
2005 WINNER: Larry Hughes
2005 WINNER: Bruce Bowen
RUNNER UPS: Shaquille O’Neal, Ben Wallace, Dwight Howard, Ron Artest
2007 WINNER: Bruce Bowen
Bowen nearly started something with Isiah Thomas during the season, but it was his postseason performance that won Bowen the award. He consistently defended the Spurs opponent’s best players and did a great job against them. He’s a little dirty, sure, but he’s also one of the hardest-working players in the League.

The Tiffani Thiessen Award
FOR: The new player on a team who made the most impact.
SPONSORED BY: Darren Starr
2002 WINNER: Michael Jordan
2003 WINNER: Troy Hudson
2004 WINNER: Sam Cassell
2005 WINNER: Shaquille O’Neal
2006 WINNER: Sam Cassell
RUNNER UPS: Andre Miller, Allen Iverson, Stephen Jackson
2007 WINNER: Ben Wallace
Everyone knew Big Ben would bring defense and toughness to the Bulls, but I don’t think anyone thought he’d lead them to a 49-33 record and first-round knockout of the defending champs. Still can’t shoot, though.

The Big SLAMMY
FOR: The Most Valuable Player in the League — in the sense of the guy no team would ever trade away.
SPONSORED BY: Brand Jordan
2002 WINNER: Shaquille O’Neal
2003 WINNER: Tracy McGrady
2004 WINNER: Kevin Garnett
2005 WINNER: Shaquille O’Neal
2006 WINNER: Kobe Bryant
RUNNERS UP: Steve Nash, Dirk Nowitzki, Dwyane Wade, Kobe Bryant, LeBron James
2007 WINNER: Tim Duncan
We were talking about this yesterday in the office — as good as The Tim Duncan Robot has always been, he seemed to go to another level this season. He won his fourth title and established himself as the greatest power forward ever to play in the NBA. If you were the Spurs and a team offered you any player in the NBA straight up in exchange for Tim Duncan, would you even waste your time listening? Nope.