Links: The Bells of Longoria 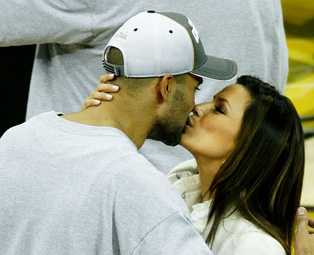 Believe it or not, I wasn’t invited to the recent wedding of Tony Parker and Eva Longoria. I know, I know — a huge faux pas from Parker to forget to invite a representative from the best hoops outlet in the media world.

But thanks to the fine work of paparazzi from across Europe, we can at least take a look at the pomp surrounding the circumstance…

• Gregg Popovich miraculously emerged from his coma just in time to attend the ceremony.

• DIAW: “He said what?”
TURIAF: “I’m not sure. You have to pay to watch the video online, and I’m not about to do that. All I know is that Kobe was like, I want a trade. And then he didn’t want to be traded. And then he wanted a trade again. I was like, crazy American!”

• Danny Ferry and Mike Brown knew they weren’t on the best of terms with Parker, but they were still disappointed that the seats they were assigned for the ceremony weren’t a little closer to the action.

• Even though Matt Bonner wasn’t invited, the Red Rocket showed up with his new disposable camera to snap pictures of the other guests arriving by bus.

• Tony was surprised and shocked when Eva deemed his t-shirt “too casual” to wear during the ceremony.

• “His name is what? Jackie Butler? And he makes how much money per year? OK, I’m heading over. Does my hair look OK?”

• Thierry Henry got a little overzealous after Tony asked him to keep an eye on things, here attempting to tackle Tony’s father, and later trying to headbutt Paris mayor Bertrand Delanoe.

• Even the normally unflappable French were confused to see Isaac Hayes trailing Jessica Alba around all weekend.