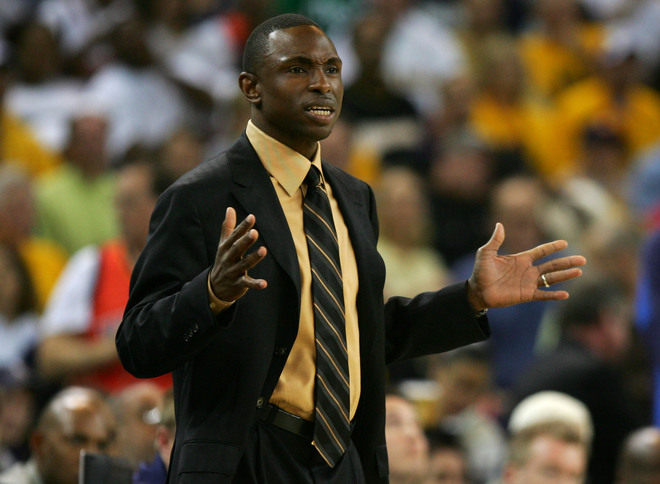 OK, late Sunday night, and a few things to mention. Let’s go series by series before you chatter away in the comments section…

We’ll start in the East, where there haven’t been a lot of close series…

EASTERN CONFERENCE
Detroit (4) vs. Orlando (0): Anyone surprised? Anyone? Orlando was really exposed as a shallow, overmatched team that needs to get a lot better. And Detroit basically got four intra-squad scrimmages to tune up for the second round.

Cleveland (3) vs. Washington (0): Much like they’ve done all season, the Cavs have sort of ho-hummed their way past a depleted Was Wizards. I’m still not convinced that Gilbert won’t play tomorrow night.

New Jersey (3) vs. Toronto (1): This Nets team has been confounding all season, playing hard one night, looking like they’d rather be at the Bing the next. But during the Playoffs, at least during games not the afternoon after Vince hosted a massive party, the Nets have been great.

Chicago (4) vs. Miami (0): What I thought would happen to the Heat during last year’s Playoffs happened this year. The Heat had no fire at all, and the Bulls took advantage of every mismatch.

WESTERN CONFERENCE
Golden State (3) vs. Dallas (1): Let’s start by giving the Warriors some credit. Last night they took everything Dallas could dish out, hung in there and then stomped the Mavs at the end. What happens now that the Warriors have the pressure on them? And what will it take for Avery Johnson to figure out that when he goes small against the Warriors, he loses? It’s pretty simple, right? I’m not a coach or anything, but check out the combined minutes played by Dallas centers last night. Wonder why the Warriors kept driving right to the rim?

And funny that Charles Barkley has decided to take on the Bay Area, since the Chuckster featured in the great NBA Superstars video, “The Warrior.” For a brief musical interlude, click here.

Phoenix (3) vs. Los Angeles (1): Kobe and Lamar are great and all, but good grief do the rest of the Lakers stink. Phil Jackson looks like he’s already making a mental list of things to pack to take to Montana for the summer.

San Antonio (2) vs. Denver (1): The Nuggets did their running and gunning thing in Game One, and since then the Spurs have put the smack down. And I loved Robert Horry’s explanation for how he stole a ball from JR Smith: “This is a time when you can go out and use your knowledge. I have been in the league for 15 years, and you tend to read situations because you have seen situations. I can read a situation where someone might inbound the ball and be a little lackadaisical and I have been watching J.R. play, and he does the same move every time, so I was able to get my hands on one.”

Utah (2) vs. Houston (2): The most competitive series of the first sound has also been the most gruesome, thanks to Houston’s now infamous “only four guys can score” evening.

I’ve slept on those last two series a little, but we get a double-header with them tomorrow night, and I’ll be tuned in.

Your turn…who’s going to take the chip home?