Links: Where Are The Conference Finals? 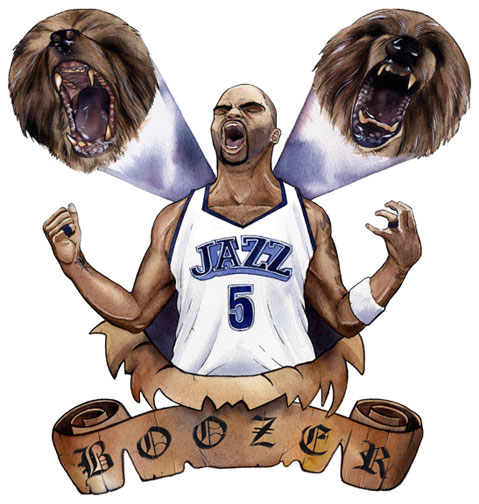 OK, OK, I’m back. I hear you, angry readers, upset that I’m spending too much time writing in and working on a magazine that you have to actually pay for and not enough time writing for free on the internets. But the truth is, I haven’t been too busy to write lately, I just haven’t been writing because I was on my annual pre-Finals sabbatical, recharging up for the sprint to the finish. During the Finals last year I wrote something like 25,000 words for SLAMonline, and I’m going to try and best that this year. So I spent the long Memorial Day weekend chilling, getting, as Khalid might say, my mind right.

But I did watch all the Conference Finals games, and I think it needs to be said:

Now Antonio McDyess(!) and Brent Barry(!) are posting 20 point games. Now the Spurs can’t make a shot but the Lakers can’t put them away. Now the team that won 60+ games in the regular season can’t win a game on the road. Now the team that has to be favored to win it all has a back-up backcourt of Farmar and Vujacic, two guys that I don’t think would draw much of anything on the trade or free agent market. Now the Pistons, who have to be the moodiest and least motivated collective of stars in a while, could very easily make it to the Finals.

I’m sorry, but high-level NBA Playoff basketball is supposed to be better than this. Will any of these games be remembered for anything other than the lack of excitement?

Now, perhaps this is NBA burnout speaking. When I brought up this theory earlier today in the office, Ben suggested that maybe I’m just tired of watching basketball, since all of us at SLAM are way more immersed in the NBA than the casual fan. And after all, TV ratings are up this year. I argued that a ratings rise must be attributed to parity, to more teams being more competitive because of the lack of greatness. There’s a lot of good teams, but there are no truly great teams out there right now. And I’m pretty sure that any of the four teams left could suit up against their own franchise’s pervious title teams and get swept.

Hopefully, one of these squads decides they’re ready to stop screwing around and play basketball. Hopefully.

• Hey, my Hawks hired a new GM today. Sadly, it wasn’t me — it is Rick Sund, the former GM for the Sonics (before those guys from Oklahoma started screwing over everyone in Seattle) is the man. I know absolutely nothing about him, so I’m giving him the benefit of the doubt for now. I’m praying the Hawks don’t start incessantly drafting French centers who need a lot of development.

Welcome to Atlanta, Mr. Sund. Here’s hoping you make us forget about your predecessor…what was his name again?

• By the way, we can’t call the Lakers’ bench The Bench Mob. That was Sacto’s bench back in the day, right? We need a different name for the Lakers bench. Anyone?

• If Mike Beasley is going to continue to be compared to Derrick Coleman, can someone make a Derrick Rose/Gary Payton comparison so that the Draft could resemble a repeat of the 1990 NBA Draft, when Coleman and Payton went 1/2?

• I was on YouTube the other day and came across this video from last year…anyone remember this? A dude showed up at the BBC looking to apply for a job, and he somehow ended up on live TV introduced as an IT expert. The look on his face when he realizes what’s going on is priceless, as is his attempt to answer all the questions.

“It was a tossup between painting Deron Williams and Carlos Boozer,” says Joel. “I ended up going with Boozer mainly because I decided I wanted to paint a couple grizzly bears. Boozer has a large tattoo on his left arm of a grizzly bear tearing through his skin with the words ‘C-Booz Unleashed’ beneath it. He has said that he feels he is like a grizzly bear on the court and I wanted to show Boozer becoming unleashed as if he’s the bear itself. I went with a bit of a mishmash of his tattoos, including a scroll beneath the figure, similar to some of his other tattoos. Also, it’s a bit obscure, but if you imagine the bear heads are eyes, boozer is a snout and the torn edges and rips in the scroll are teeth, it sort of looks like a bear.”

Looks dope to me. This week’s team will be the Cleveland Cavaliers. I have a feeling we may be seeing an illustration of LeBron James. Just a hunch, though.