Links: Where Dem Dollars At? 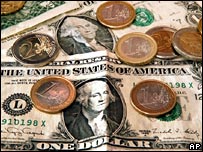 So I got an email the other day that snagged my interest and I thought it was worth a post here.

Hey I know this isn’t the normal thing to ask, but I think it would be a good thing for The Links. Can you e-mail anyone with the Raptors and see how much benefit they are going to get from the Canadian dollar being equal to the US dollar and what it means if that trends continues? I would assume that would be a big benefit if they are paying anything in Canadian currency. I mean, how smart would an agent look if he demanded that his player be paid in Loonies rather than Dollars?

I initially wasn’t sure what Loonies are — do they pay people in Canada using breakfast cereal? — until I remembered context, blah blah blah. Canadian money it is, then.

The thing is, I’m pretty sure that all NBA contracts, no matter where your team is playing, are paid in US Dollars. Anyway, I emailed someone in Canada who knows about these kind of things…

The answer to the question of the stronger dollar is actually surprising as in some ways it kind of hurts the Raptors. The Raptors are owned by a parent company Maple Leaf Sports and Entertainment — this company owns the NHL team also. MLSE is owned by the Ontario Teacher’s Pension Plan which is actually something like the World’s or North America’s most wealthy pension plan; it’s handled like a hedge fund.

MLSE used to take advantage of a loophole tax-wise that was established for small market Canadian NHL teams where they were basically reimbursed for losses as if they were competing on a slanted field because of the high US Dollar.

So money-wise, the Raptors are coming out the same. Where they are being hurt or will be hurt is potentially in free agency. The Raptors used to be able to say to free agents that they were going to make X number of dollars but they were living in a country where they were being paid US Dollars but spending Canadian Dollars and the exchange was like 1.53-to-1.00. So basically you weren’t spending anything and it counter-acted the high tax bracket for guys. With the dollars being more equal they lose that advantage.

And with the Raptors going the European route, they keep having to deal with European agents who ask for the contracts to be paid in Euros, as the Euro has been crushing the US Dollar for a while. Basically it’s been a no go. But smart.

The other thing about all this that got me thinking was, What happens when the NBA opens a franchise in Europe? Right now the Euro is worth more against the US Dollar than it’s ever been worth before. As far as merchandise sold, that won’t really matter because merchandising revenues get split up among all the NBA teams. But where a Euro team would have a significant advantage over US teams, I would think, is in tickets sold.

Now, I know it’s not this simple. After all, a team in Europe would also have to pay more dollars to build the arena, staff the team, buy office supplies, all that stuff. But wouldn’t they have an advantage over the US-based teams? And wouldn’t players in Europe be at a disadvantage if they’re being paid in US Dollars but are under the same contract structures as US teams (meaning they couldn’t be paid more money despite the Dollar not stretching as far in Europe as it does here)?