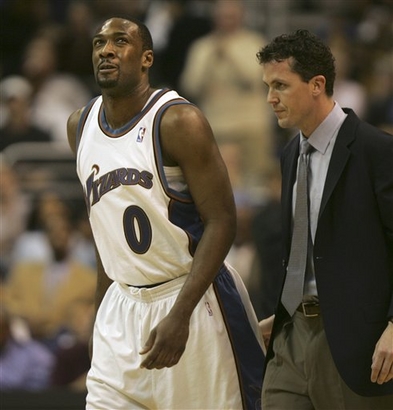 The injury to Gilbert has sunk in. A meniscus tear, a vintage Madden Football injury. If you planned to watch the NBA Playoffs, this really cramps your style. If things stay they way they are, the Wizards would play Toronto in the first round. Because of the fairly recent divisional alignments, this puts the Raptors in a weird place. They have very little playoff experience, and a handful of what could have been devastating injuries of their own, but now they are in position to cruise into the second round. Phoenix was distantly similar to that in Nash’s first year coming over from Dallas, but they were more experienced and a much more overpowering regular season team. Enough about the Raptors and their future though. We should have plenty of time to talk about them. Maybe they won’t be cruising if the Wizards fall far enough. Vince vs. Toronto would be a very interesting series, which did not seem likely as recently as yesterday afternoon.

The Washington Wizards will have no Gilbert and no Caron. Right now they are hovering as that 6th seed, but let’s take a look at their schedule the rest of the way.

Well… there’s always that adrenaline and catching a team that’s sleepwalking, but game by game: Cleveland still has to make an effort to catch Detroit. Jersey will go hard against the Wizards twice to try and steal the 6th seed from them. Miami is still just a game up on Washington and wants to make sure they don’t lose the 4 seed and home court in round one. Atlanta could go either way. Chicago could still be in a race with Cleveland and/or Detroit for positioning. Orlando might have to hold off Indy with a late win, or if Washington slides far enough could use the game to jump into the 7th spot. Indy could be a winnable game if they are eliminated and just going through the motions. It’s not completely outrageous to say that Washington might drop all the way down to the 8th seed. Not that it matters who they play int he first round. I don’t think anyone is giving them a chance. Antawn Jamison, you are not being disrespected in any way!

Why couldn’t some lottery team have this happen? Oh wait, they all have. Everybody hurts. This is especially irritating because the Wizards had an up and down season, and were poised to go up and down again, and at the very least entertain us in the first round with some Gilbertology. Losing Caron and Gilbert over a four day span? That’s really not fair, not at this point of the season.

We were all looking forward to Gilbert facing LeBron in a revenge scenario from last season. Or a run and fun and gun series with the Raptors, in a Phoenix vs. Denver of the East kind of way. Now, it’s what could have been. This is depressing. Happy Easter everyone!