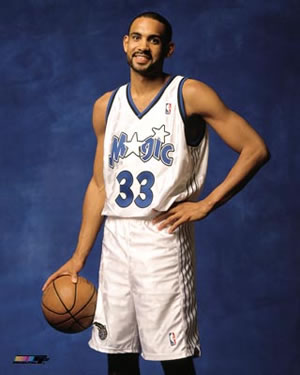 I’m on an Amtrak Acela Express right now, heading back to NYC after catching the Magic-Celtics last night in Boston. Here are some notes.

Important: I’m saving a lot of my pregame stuff for a little while down the road because much of it is fitted for our Slamonline audio technology.

Let’s just say a certain Boston Celtic was walking around the C’s locker room screaming “BAAAAALLLLLLLLLLLLLINGGGG” and I got an audio plug for our man Sam.

Oh, and note to Bill Simmons: Brian Scalabrine would like to email with you. Color him curious.

–I spoke to Keith Bogans and Keyon Dooling about how Bogans, then at legendary Dematha high school, posterized a kid I knew in college. This led to a long discussion about Bogans’ athleticism back in the day, which led to Bogans noting that many people forget he used to be extremely athletic.

Dooling joked that people sleep on Bogans’ athleticism, comparing him to Kaizer Sose. Naturally, I had to follow this up by talking about my barbershop quartert in Skolkie, Illinos and this woman that “was like Orcha-fat.” I’m not kidding about any of this. I might even have it on tape.

—James Augustine is getting a long, drawn-out rubdown. No, he didn’t play.

—Delonte West walks into the Celtics locker room and does a Chicken Noodle Soup dance. That was horrifying. I’m going to need weeks to recover from this.

–My press credential doesn’t fit around my neck. I have to wear it on my wrist.

–With sincere apologies to the late Red Auerbach, some of the Celtics dancers are very hot as far as NBA cheerleader standards go. In other words, they don’t lose hotness when you see them up close. There are many NBA cheerleaders that only look good gyrating over a logo. Actually, it can be kind of terrifying to see some of these girls up close because it looks like makeup attacked their faces. Not so much in Boston.

–There are Celtics fans sitting behind the basket that have homemade Scalabrine jerseys that are white t-shirts with printed out Joe Nets Fan cutouts on the back.

–It might be JJ Redick’s debut tonight. Anybody not excited to see JJ go toe-to-toe with Wally World isn’t a ball hog. (Oh, and if you just got really excited because you’re anticipating lots of JJ in these notes…he didn’t play.)

—Al Jefferson is out because of an appendectomy.

–Inserted because of early foul trouble to Ryan “Underwear” Gomes and Scalabrine, Leon Powe makes his Celtic debut and performs masterfully. He receives a rousing ovation upon his exit.

–Things I liked about Bassy’s game last night: His speed, his ability to freeze his man with a hesitation, his improving jumpshot, a 5:1 assist to turnover ratio, the force with which he attacked the basket when he fully committed to attacking the basket.

Things I liked about Rajon Rondo’s game last night: His quickness, his unselfishness, his ability to slow it down when necessary, his court vision, a 7:1 assist turnover ratio.

Neither played good defense on Jameer Nelson and Rondo shot 0-5 for 0 points.

Also, the Boston Globe noted this morning that they’ve already been torched by Gilbert Arenas, Brevin Knight, Deron Williams and Chris Paul. Add Nelson to that mix, and factor in that the Cavs starting point guard is Eric Snow, and there’s only one game they’ve played so far this season that would demonstrate a solid defensive effort on an opposing point guard. And that was 4-12 shooting night from Chauncey Billups. Billups also went 11-12 from the line in that one and finished with 20 and 11. So that point is moot. Basically, if your point guard can score, the Celtics are in trouble.

So defense isn’t their strong suit, though, in fairness, it’s tough when you’re that young and that undersized. Still, fuse ‘em together and you’d have the potential for a perennial all-star.

–Speaking of Nelson, he was incredible. It seemed like he sank everything and did whatever he wanted. It must have been a proud moment for St. Joe’s University and Phil Martelli when he and West both caught fire in the second quarter.

—Grant Hill used a vintage cross-over dribble to shake his man (Paul Pierce?) out of his socks, before jack-knifing through the lane around two more guys for a nasty up and under. It’s so nice to see the old Grant Hill back, even if he may break down again soon. The Hill-Pierce matchup was a throwback classic. Hill got the better of Pierce in the first half and P-Double did his thing in the second, even though he ended up shooting 6-20.

—Carlos Arroyo got one of those new ball bounces after getting fouled on a jump shot. Speaking of the new ball, Japanese NBA writer Kaoru Cheyenne Sanada tells me it is made of the same material that makes up Japanese school bags.

–Crazy world we live in: A blindfolded guy hits a free throw to win lasik surgery.

–The Celtics go on a run in the third spearheaded by Wally Skizkldjfeaprjadfakire and Underwear Gomes. Gomes has an awesome midrange game. If I was Rod Thron, I’d package some draft picks, Josh Boone and cash for him. Before all you Celtics fans jump on me for this idea, think about the following: you already have Al Jefferson, Leon Powe and Brian Scalabrine, and you need to cut your rotation down a bit and let some of the kids develop. How bout a big bodied cheerleader (Boone), the potential for a brighter future (multiple picks), flexibility and some money? You’re not going anywhere this year anyway. OK, I admit that I just really want Ryan Gomes on my team and am hoping you get robbed.

–Oh my, it appears the Celtics dancers are bringing sexy back. By the way, if you too have lots of friends that routinely claim to be “bringing sexy back,” do what I do and hit them. My final note on the dancers: If you live in Boston and you’ve noticed a sudden drop in quality at your local gentleman’s club, um…

–After getting hot, Wally falls in love with his jumpshot and starts laying brick. In a related story, the sky is still blue.

–Getting ready to inbound the ball near midcourt, Paul Pierce repeatedly slips on a wet spot. It was hilarious because he kept on standing up half way before falling again. I hope this shows up on Youtube with a slow motion option.

–Though his defense still needs a ton of work, Darko looked really smooth in the post. He moves fluidly, has a nice hook shot and throws effective fakes.

–Keyon Dooling absolutely murders clotheslines Wally World on a drive to the basket. That’s a flagrant 2 and an ejection.

–The Celtics make an energetic run but their comeback attempt is thwarted by Trevor Ariza’s athleticism and Nelson’s clutch play.

-Dwight Howard finished with a manly 17 and 15. I’ve conveniently left all my notes on him out of this post.