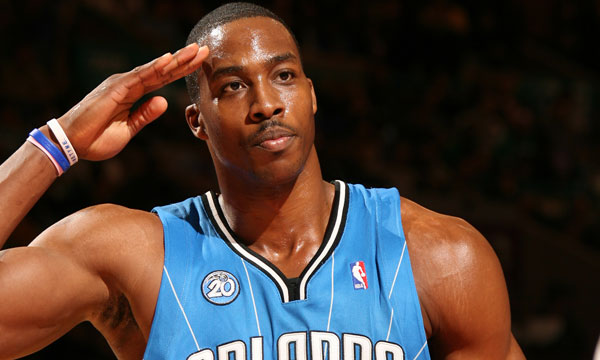 According to the latest published reports, the Orlando Magic are working on a potential blockbuster trade for superstar center Dwight Howard. The deal involves Orlando, Brooklyn and Cleveland.

Dwight Howard would end up in Brooklyn (his preferred destination all along), while Brook Lopez and a bunch of draft picks would head to Orlando. Kris Humphries would then be dealt to the Cavaliers.

There are some landmines to side-step, however, before any deal can be completed between the three organizations. As the Plain Dealer and News-Herald explain:

In its most basic form, with many parts undetermined, the trade would send Brook Lopez and several draft choices to Orlando for Howard, while signing-and-trading Humphries to Cleveland in order to make room for Howard’s salary. But the Cavs, roughly $20 million under the salary cap, are in the business of accumulating first-round draft picks, not giving them away, so exactly how they’d fit into this deal is not clear. One of the teams is going to have to give the Cavs something — a first-round draft choice or, possibly, Nets swingman MarShon Brooks — to facilitate this deal. In addition, because Humphries is an unrestricted free agent, the Cavs could have just signed him if they really wanted him, so it’s possible an additional deal could be in the works.

A source said the holdup was the Nets wanted the Cavs to give them one of their first-round picks, which was a potential deal-breaker. Unless the Nets back off that demand, a source said, the Cavs could pull out of the talks. The Cavs have three potential first-round picks in the 2013 NBA draft, as well as two second-rounders. It’s not out of the question they could get more.

There are clearly many details still to be worked out — and other teams, such as the Philadelphia Sixers could get involved — but for now anyway, the Brooklyn Nets appear to have regained the lead over the Los Angeles Lakers in the chase for the NBA’s best center. But this thing isn’t done yet.