Magic vs. Pistons: The War of Words Has Begun 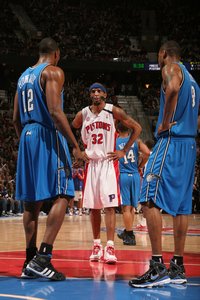 OK, so Soulja Boy and Jay-Z probably won’t be getting involved in this one, but it is still a nice little distraction from the methodical Game One beatdown administered by Detroit.

Following the game, Rashard Lewis and Theo Ratliff did a little posturing in the press, posturing that was inspired by a hard foul on Ratliff from the smaller Lewis.

“There’s no need for guys to come to my rescue. I mean, that’s Rashard Lewis. He fouled me hard, but he’s a three-man (small forward). It wasn’t a big deal.”

“You can have a lot of energy when you play five minutes a game,” [Lewis] said. “What has he played all season, 15 games? Tell him to come out and guard me at the 3-point line and we’ll see what happens.”

Ooh, them’s some fightin’ words! Come out and guard you at the three point line? Theo better be careful, Rashard, he could get seriously hurt out there. You know, by all of those long-distance bricks you were tossing up in the series opener.