Marion Wants Out of the Phoenix Matrix 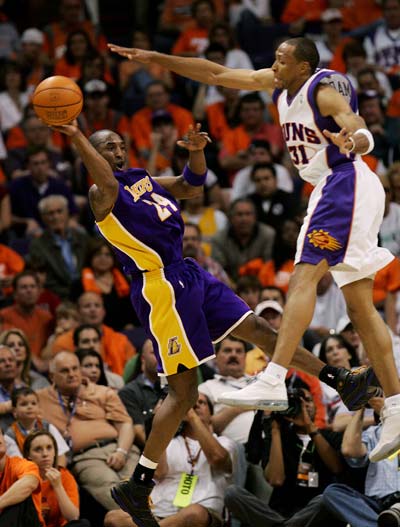 Citing frustration with constantly finding his name in trade rumors and the team’s refusal to discuss a contract extension, Shawn Marion went public with a trade demand as he spoke to the Arizona Republic last night.

“I’m tired of hearing my name in trades,” Marion said. “I love my fans in Phoenix but I think it’s time for me to move on.”

“Regardless of everything that went on with the extension, I’m tired of hearing my name in trade rumors,” Marion said. “It’s time for me to move on. I felt like they tried to force my hand to Boston with the (Kevin) Garnett stuff.”

Marion, 29, said that he has already informed GM Steve Kerr, coach Mike D’Antoni, and Managing Partner Steve Sarver of his desire to wear a different uniform.

The two names being floated as possible trade bait for Marion are Utah’s Andrei Kirilenko (whose wish to leave the Jazz is the League’s worst kept secret) and do-it-all Laker forward Lamar Odom.

Oh boy: According to Sean Deveney of The Sporting News, the Suns and Lakers are working on a possible blockbuster trade for the Matrix (which would send Lamar to Phoenix), and Marion said he’d love to play alongside He-Who-Shall-Not-Be-Named in Lakerville. According to Deveney’s source, the trade can only happen with team owner Jerry Buss’s blessing.

I think I speak for all Laker fans when I say, PUT DOWN THE BOURBON AND APPROVE THE TRADE, JERRY! FOR GOD’S SAKE, MAN!!!