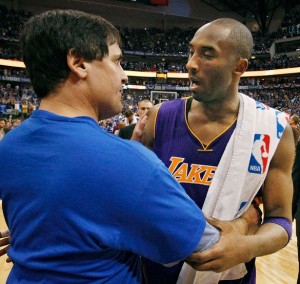 With the acquisitions of Steve Nash and Dwight Howard over the summer, most people now consider the Los Angeles Lakers very serious title contenders for the 2013 crown.

There are legitimate concerns about the experiment working — aging superstars, chemistry concerns, injuries, and coaching — but the overwhelming public opinion surrounding the Lakers is that of a scary, super-team.

One person who claims to be undaunted by his new-look, longtime Western Conference rival is Dallas Mavericks owner Mark Cuban.

Cuban isn’t so sure things will turn out so well for the Lakers next season, despite major roster upgrades.

“The Lakers have done this before,” Cuban said. “Remember Gary Payton, Karl Malone and Kobe and Shaq were all together, and it didn’t work. It takes great chemistry, like coach (Rick Carlisle) alluded to, it takes guys wanting to be there — I don’t know if all their guys want to be there — it’s going to be interesting.”

“Look, (the Lakers are) going to be a great team, but I remember when we made our run,” Cuban said. “We weren’t supposed to win any series. The Lakers were defending champs when we swept them, and they had everybody back. A lot of teams do a great job winning the summer, but I never get so antsy about what happens over the summer.”

The comparison between the current Lakers and the 2004 version has proven to be a popular one among naysayers, but there are clear differences (back then, Kobe was dealing with sexual assault allegations, to say nothing of the simmering beef between Shaq and Bryant.)

Mark Cuban can shrug off the Lakers’ offseason bonanza all he wants, but to discount them would be beyond foolish.