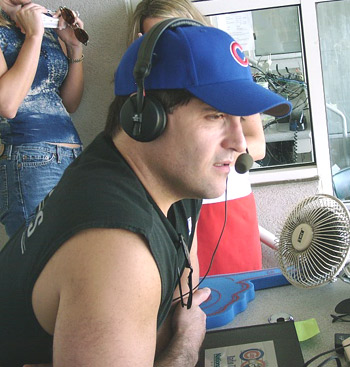 -Marky Mark wants some of that hot Cub action. (Via: Mavs Moneyball)

How one goes about sending in an application to buy a Major League Baseball franchise is a mystery to those of us who aren’t in the ballclub-acquisition business. By fax? By standard mail? Or is there an online form?

Controversial Dallas Mavericks owner Mark Cuban said Thursday that he has submitted his application to purchase the Cubs. He said he believed he sent it in last week, though he wasn’t sure.

(By the way, I have no idea what “hot Cub action” means. My apologies.)

-Reportedly, the Knicks have expressed interest in acquiring the highly coveted Mo Williams.

-The Lakers have re-signed Luke Walton.

-Despite being sidelined with a bum right shoulder, Joakim Noah continues to work out hard.

-The freakishly athletic Tyrus Thomas is out with a sore knee.

–Greg Oden blogs about his night at the ESPYs.

I was looking all good in my suit. People usually say the man makes the suit. Well, in my case the tie made the suit honestly. I got to be on the red carpet with all the stars and celebrities. It was crazy to me because I still don’t look at myself as one. But people would come up and say hi to me and I would be star struck.

(Hey Greg, love the blog. Seriously, it’s great. But, um, have you ever heard of these little things called “paragraphs”? I suggest you look into them.)