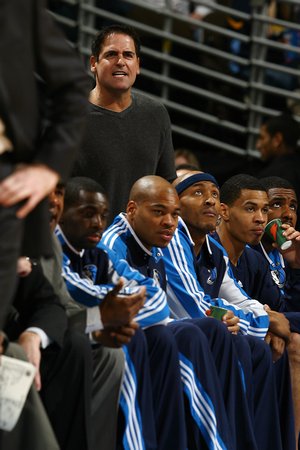 Following a demoralizing loss to the Thunder on Monday night, Mark Cuban took some time away from saving the economy, and lit into the basketball team that he owns.

Though no specific players were named in his rant, Cuban did not mince words.

From the Dallas Morning News:

“If each player can’t take the personal initiative to make every game important and play like it, I don’t see them being here next season. The ball won’t always bounce the way we want it to, but every player can control their level of effort. If it’s not important enough to them to lay it out every game the rest of the season, they won’t be back.”

“I don’t care what their contract is. I would rather turn over the roster 100 percent than subject fans to another game like last night. This team has the talent to win in the playoffs. But that’s only going to happen if all 15 guys know and execute their assignments and play every possession like it’s important.”

With their work clearly cut out for them, the 8th place Mavs now have the unenviable task of playing back-to-back games against the Spurs and Hornets starting tonight.

Looks likes some changes are coming to Dallas and soon.