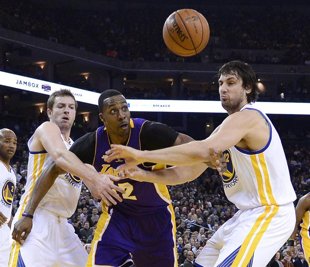 There had been talk not too long ago that the Los Angeles Lakers could mount a charge and eventually leap-frog the Golden State Warriors in the standings for the sixth Playoff spot.

The Lakers are barely clinging to the final postseason spot in the Western Conference, with the Utah Jazz nipping at their heels.

Despite the Lakers’ futile, late rally, the Golden State Warriors had blown the doors off their star-studded rivals from Los Angeles last night, and head coach Mark Jackson sent the visitors away with a clear message: the Dubs are simply a better team.

The standings, Mark Jackson said, already proved the Warriors are better than the Los Angeles Lakers. Now, Golden State has the head-to-head victory to prove it. […] “It’s a message that was sent,” Warriors coach Jackson said. “I wanted my guys to understand that we are the better team. … We were not going to come into the game on our heels. We respect them and they have guys that will be in the Hall of Fame. … That being said, this is a different day.”

The Warriors lead the surging Houston Rockets by a game for the sixth seed, and Mark Jackson continues to work up their confidence.

As for Kobe and the Lakers, Bryant says he’s not concerned about his team’s three-game slide and the daunting task ahead (a claim that’s increasingly harder to believe.) Per the LA Times:

“I’m terrified,” Kobe Bryant said, sarcastically, of the suddenly sagging Lakers. “Do I look terrified? Not at all.” […] “I don’t think it’s time to get emotional,” Bryant said. “We’ve got to just maintain our poise.”