Matt Geiger Just Wants to Land His Helicopters in Peace 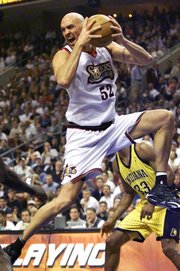 -Former NBA player Matt Geiger has a dream, and that dream is to build a heliport on his property. (Via: FanHouse)

Matt Geiger wants permission from the county to build a heliport on his 36-acre estate in East Lake. On Monday, he handed out photos of the proposed path to residents who are worried about how the possible noise and pollution may affect their lives.

The former NBA player said his friends, with him as a passenger, have landed helicopters on his 36-acre estate many times over the past few years.

He said nobody complained.

(I don’t know about the rest of you, but the idea that Matt Freakin’ Geiger has enough money for this to be an issue depresses me enormously. It’s Matt Geiger for crying out loud!)

-The last time an NBA ref was caught betting on games, he walked thanks to a technicality. The justice system stays losing. (Thanks to reader Adrian Cordiner for the tip.)

-Owner George Shinn has agreed to sell 25% of his stake in the Hornets to a group of local investors.

-And finally for today: If you’re going to go on a murderous rampage, it’s probably a good idea to keep your intentions to yourself.