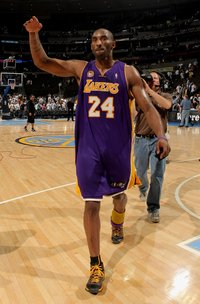 On Friday, the LA Times got word that Kobe Bryant will win the first MVP award of his illustrious career. The official announcement is expected to come this week.

“I’m very excited,” Bryant said of winning the MVP award. “It’s a great honor. I didn’t know if this was going to happen in my career. It’s special, especially to share it with the group of guys we have here.”

“In the toughest conference in basketball, he was able to lead his team to the top spot and also have great individual numbers to go with great team numbers,” Derek Fisher said. “He’s a different man now. He has a greater appreciation and understanding of how to be great himself, but then also to make guys that are just average or good, great themselves.”

Twelve years (some of them played at an historic level). That’s how long it took the player considered by most to be the best in the business to win the game’s greatest individual honor. I point that out in case any Chris Paul fans are legitimately upset that their guy didn’t win the award.

This Laker season continues to amaze and befuddle me: an MVP for Kobe (something Laker fans had begun to doubt he’d ever win), and a legit chance to play in the NBA Finals. Please, no one pinch me.