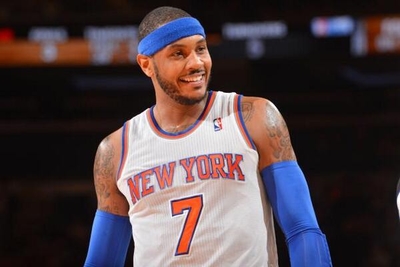 Carmelo Anthony and Phil Jackson have yet to sit down and talk, but it’s clear that Melo greatly respects Jackson, and is ready to accept his leadership.

Should Jackson suggest to Anthony that it would be beneficial if he altered his game (ie. looked to get his teammates more involved in the offense), Carmelo says he’s all ears.

“I’m not sold or stuck on my play. What I’ve been able to do these past 10, 11 years has gotten me at where I am right now. If Phil wants to come in and change that this late in my career, if it’s going to help me win a championship, I’m with it.”

“As far as knowing what it takes to win, Phil is the best to ever do it,” Anthony said. “So for me to be able to have the opportunity and have him by my side, for him to teach me, because I’m still willing to learn the game of basketball. And I haven’t won anything. So he’s won a lot. I can learn a lot from him and his system, things that he wants to incorporate here. I’m hoping and praying this all works.”

The New York Knicks introduced Phil Jackson as team president Tuesday morning, and he was quick to say that the team envisions Carmelo Anthony as being part of their future.

Anthony, an unrestricted free agent this summer, has a big decision to make. And for what it’s worth, the All-Star forward thinks Jackson will help draw other free agents to New York.

Phil Jackson won’t be Carmelo Anthony’s coach, but the Zen Master’s guidance will be instrumental to the Knickerbockers’ fortunes going forward.

That has to make Knicks fans feel a glimmer of hope, during an otherwise miserable season.