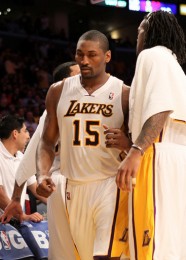 As expected, the NBA came down hard on Metta World Peace for his elbow to the head of James Harden this past Sunday, which resulted in a concussion for the OKC Thunder’s star forward.

Per the official press release:

The Lakers’ Metta World Peace has been suspended for seven games without pay for striking the Thunder’s James Harden in the head with his elbow, the NBA announced today. […] “The concussion suffered by James Harden demonstrates the danger posed by violent acts of this kind, particularly when they are directed at the head area,” NBA Commissioner David Stern said. “We remain committed to taking necessary measures to protect the safety of NBA players, including the imposition of appropriate penalties for players with a history of on-court altercations.”

The suspension will begin with the Lakers’ next game at Sacramento on April 26. The remaining games of the suspension will be served over the next six games in which the player is eligible and physically able to play, including this season’s playoffs.

Considering the outrage expressed by everyone from fans, media and opponents, Metta World Peace’s punishment from the NBA is tough but fair. What he did was indefensible, and he’s lucky the League didn’t overreact and keep him off the court even longer.

As for James Harden, there’s no telling when he’ll play again. He’s currently listed as day-to-day, but appears to be in good spirits and his teammates seem to believe he’ll bounce back from the concussion, and be ready to go once the Playoffs start.