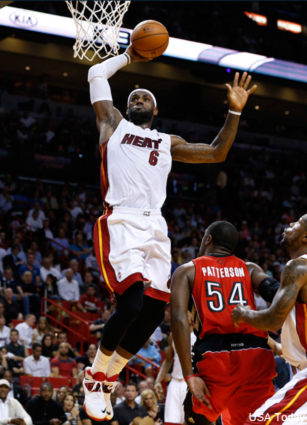 In the first game of the evening on Monday, Washington ran its offense primarily through Andre Miller for much of the second quarter and the vet did work. Miller dished 9 dimes on the game, while operating in the post on Charlotte’s smaller point guards like Kemba Walker and Luke Ridnour, and the Wiz outscored the Cats 40-19 in the second frame to take a commanding 60-44 lead into intermission. But, Miller’s success came only after John Wall struggled. His college crew might be in the Final Four, but Wall shot an abysmal 4-16 from the field to go along with five turnovers.

Even though the game seemed in doubt for the Bobcats at the break, Steve Clifford’s club clawed back in the second half behind Chris Douglas-Robert’s big game (18 points on 7-9 shooting), Kemba’s 21 and 10 and another beastly performance from Big Al Jefferson. Charlotte bested the visitors 30-14 in the fourth quarter and used a 4-minute 12-2 run from to reclaim the lead 93-92 with 3:30 left in the game on a Jefferson follow-up layin. Charlotte cruised from there to clinch a big late-season home win.

Big Al got 7 stitches after Trevor Booker hit him in the face early in the first quarter, but still returned, played 40 minutes and posted 19 and 11. With the way Roy Hibbert’s play has dropped off as of late, Al has to be considered for the Third-Team All-NBA frontcourt spot. He’s had an absurd season.

The Spurs are streaking full-steam ahead into the postseason. San Antonio has now won 18-straight games. Yea, Kawhi Leonard’s return has put this team into championship form. The ball movement is impeccable. Marco Bellini can’t miss from deep. Timmy is an ageless wonder. Boris Diaw is the unsung hero, role player we all know and love.

But we have to use this space to talk about Indiana. Yeesh, has the Pacers offense has been terrible as of late. Indy is just 2-6 since barely beating the Sixers 99-90 on March 17, only 9-10 since the trade deadline and scored just 35 points in the entire first half on Monday. The Wizards scored 40 in the second quarter alone, remember? Frank Vogel’s a defensive wizard, but his team’s offense is stagnant, there’s very minimal penetration and Paul George looks completely unenthused in games that aren’t against the Miami Heat. Indiana is coasting into the playoffs. There is no other reasonable explanation. Fortunately, three of the Pacers’ next four games come against teams with losing records. Maybe they can right the ship before they clash with Miami on April 11.

Fresh off of their first win in 26 tries, the Sixers looked primed to unfathomably win their second-straight game on Monday. Philly nursed a 92-89 lead with 3:08 remaining in the contest thanks to a Thaddeus Young three-pointer. But that’s when Atlanta rallied of a 14-3 run to close the game and overcome a 31-18 deficit following the first quarter.

The Hawks clamped down on defense over that stretch, forcing two key turnovers from Michael Carter-Williams and Thaddeus Young. The W keeps Atlanta up 1 game on the Knicks for the 8-spot in the Eastern Conference as well. Cleveland’s only 3 back too. This is getting kind of fun.

How would Detroit respond to dropping a game in Philly and allowing the Sixers to end their 26-game losing streak on Saturday? The Pistons started out the game strong, opening up 34-30 lead after the first quarter. Brandon Jennings was clicking after getting tossed in the first quarter against Philly with two quick technical fouls. Jennings finished with 20 points and 13 dimes.

Milwaukee responded in the second quarter, opening up a 61-52 lead at halftime. Brandon Knight had himself a game in the Palace, too. Knight scored 25 points to go along with 9 boards and 7 assists to pace the Bucks. He slipped through Detroit’s porous defense all second quarter, scoring and dumping off to cutting teammates for easy buckets in the paint.

The game’s final 24 minutes actually produced competitive, exciting basketball between the Milwaukee Bucks and Detroit Pistons. You read that correctly. Greg Monroe did work down low, posting a game-high 28 points to go along with his 14 rebounds. Monroe’s steady offense helped push the Pistons past the visitors, and Josh Smith came up huge in Detroit’s late 14-6 run to take a 9-point lead with 54 seconds remaining. Smith had 15 points in the fourth quarter.

While the Pacers struggled in Nap Town, the Heat took care of business in South Beach. LeBron was just unreal all night long, finishing with 32 points, 8 assists and 7 rebounds with plays like this:

The win moves Miami back into the No. 1 spot in the East, having played 2 games less than the Pacers. And with Toronto and Chicago currently boasting identical records, it will be very, very interesting to see how the top-four seeds end up in the East.

With Rajon Rondo making his broadcasting debut, the Celtics and Bulls slugged out the majority of this Monday night contest in the United Center. Chicago was clinging on to a 71-70 lead entering the fourth quarter, but that’s when the Bulls rattled off a 17-2 run over the final frame’s first six minutes to take a commanding 16-point lead, highlighted by this beautiful Taj Gibson dunk:

That sequence epitomizes what this awesome Bulls stretch has been in 2014. Joakim Noah (19 points, 11 rebounds, 5 assists, 2 blocks) facilitating on offense and young guys like Jimmy Butler and Taj Gibson truly stepping up and making a leap in their contributions. We have to give a hat tip to Mike Dunleavy, too. The vet swingman scored 22 points on 7-12 shooting.

With MVP-candidate Blake Griffin sitting out his first game of the entire season, the Clippers showed off how their role players are truly coming into playoff form.

Jared Dudley got the start in place of Griffin and chipped in 16 points, 4 rebounds and 3 assists. Matt Barnes continue his stellar play of late, finishing with 19 points, 6 boards and 3 dimes of his own. And Darren Collison hung 28 on the board in 43 minutes starting at the two-guard alongside Chris Paul. He’s thrived in that role since he assumed it in place of the injured JJ Redick.

“It was really a good win for us with all the guys out,” Doc Rivers told reporters after the game. “We kept believing if we could rebound, then we could really get out on the break and I think we finally, really broke through in the third quarter because of our pace.”

Most importantly, DeAndre Jordan was a man amongst boys in the paint. He collected a staggering 24 rebounds, 10 coming on the offensive end, to go along with 11 points. He can do a whole lot more than dunk.

Monday night gave us a look into the crystal ball at who the game’s top big men are going to be in just a few short years. DeMarcus Cousins and Anthony Davis are both extremely talented forwards, but Cousins ruled this night.

Boogie made all 7 shots in the third quarter to its narrow victory over the Pelicans. Cousins finished with 35 points, 14 rebounds, 3 assists and 2 bocks, keying the Kings’ huge rebounding attack. SacTown gobbled up 15 offensive rebounds that led to a 22-4 Kings advantage in second-chance points, giving the Kings an enormous edge in an otherwise tight 48 minutes.

And even though Cousins was sensational, Ray McCallum’s career night may have truly been the difference for Sacramento. The rookie point guard had 22 points and 10 assists while starting in place of the injured Isaiah Thomas. Even more important, McCallum only turned the ball over once in 44 minutes of action.

Memphis continued to fight for its playoff hopes on Monday, earning just its fifth win in Denver in franchise history. The win was largely in part to Zach Randolph’s key 13 points in the fourth quarter

But with 8.2 seconds left and leading 93-90, Z-Bo missed two big free throws, giving Denver a chance to force overtime. That’s when Brian Shaw showed how gutsy a coach he can be, drawing up a wacky final play:

Kudos to the Nuggs for getting a wide-open look, but Mosgov clearly botched Denver’s chances to tie up the game. After corralling his miss, Mosgov had plenty of enough time to kick the rebound out to two of his teammates who seemed to be wide open in the right corner. Ty Lawson and Aaron Brooks were clearly frustrated. Seriously, check out Brooks’ reaction to the Mosgov dunk.

This is great too:

#Nuggets center Timofey Mozgov on taking game-tying 3-point attempt: “I can make a 3-pointer. Maybe not like the best, but I can.”

To his credit, Mosgov did have 23 and 10 on the evening and he’s been playing some solid ball since the All-Star break … including 20 percent shooting from downtown.

Desperately needing a road win to stay in stride with the Hawks for the No. 8 seed in the East, New York used some season-best defense to secure a gritty victory in Salt Lake City.

“We got down and dirty. Today was an ugly game,” Carmelo Anthony told the MSG Network after the game. “On the defensive end I thought we did a great job of keeping them out the lanes, blocking shots, getting steals, getting out in transition. We played a total game today.”

Anthony scored 34 points to pace the Knicks, but New York’s effort to limit Utah offensively was the factor that swung the game. The Jazz shot just 38.8 percent from the field, turned the ball over 11 times and made just 4 field goals in the fourth quarter.

The Knicks’ 31-20 third quarter pushed the game in their favor, and the team’s defensive intensity sealed the deal.