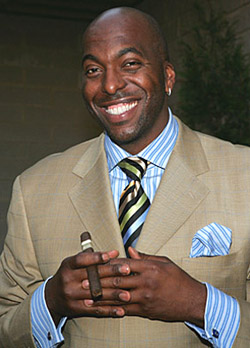 Since his retirement from the League in 2000, John Salley has been a busy man. He’s starred on a reality show (I’m a Celebrity…Get Me out of Here!), acted in movies (Bad Boys, Bad Boys 2, Confessions of a Shopaholic) and hosted various sports programs (The Best Damn Sports Show Period and the Spider and the Henchman podcast). But throughout all of this time, and for the majority his playing days, the Brooklyn native was a health maniac, focused on treating his body properly and helping others do the same. He recently filmed a “Block Diabetes” TV Spot, and he’s currently spreading information about the disease and how to prevent it on his personal website. SLAM spoke to the former hooper about his work as a wellness expert and his thoughts on the current NBA season.

Let’s start with why we’re speaking in the first place. Tell me about the stuff you’re doing to raise diabetes awareness.

Well, when I was 12 years old, 12 or 13, I found out what diabetes was. My father had a blackout right in front of me—he fell like a log, and he was so big and I was so skinny, I couldn’t hold him. It was the scariest thing in the world. Back in the day, you know black people didn’t have diabetes, they had “sugar.” So my father had the sugar, and everybody in my family had the sugar. So I was like, Why don’t we stop eating sugar? I remember saying that as a 13-year-old kid. And we helped my father with all types of research—back then we didn’t have the Internet—and I figured out it was all through the food. So when we changed the food and changed what we ate as a family, my father’s pancreas starting working again. I [now] have a routine on how you get your body back to work, so that’s what my life focus is. [For me] diabetes is literally not close to home, but in the home. Nobody should see their parent die from not knowing that vegetables and water can save your life.

One in every three kids born after the year 2000 is going to develop diabetes, and I know it’s correlated to food. The total cost of diagnosing diabetes in America is $174 billion. So they’re doing research, when we can eradicate this by changing our diet. The diet that we have now, the pyramid—we have to get rid of that pyramid. When the pyramid has meat and milk and cheese at the beginning of it, you should realize who made that pyramid. It was developed by the people who sell meat, cheese and milk. I’m not making this up. A low fiber, low fat, plant-based diet is definitely the only way to go.

That’s how you’ve been eating for…

Nineteen years now, yeah. I’m telling you man, I have all of this information. You can resist and you can renew your pancreas, so you don’t have to have insulin intake from pills or from needles.

How has your general outlook towards treating your body properly evolved over the years? Has it been consistent?

Actually, one of my brothers was diagnosed with five cancerous tumors in his stomach in 1990, or 1989. And this naturalist put him on these microbiotics and these herbs—it was a raw vegan diet with herbs. And when I saw him again, he looked healthier, and when he went in to get checked up, he had no more tumors in his stomach. He healed himself with herbs and the food, and that was in 1990. I started in January of 1991. I changed how I live my life. At JohnSalley.com, I have a slim-down project, and I’m just putting up the directory starting on the first of the year—it’s like Zagat, but it’s for health. We’re developing an app so that we can train you through it. So if you say, ‘I wanna do this,’ I literally become your in-house trainer without being there. It’s right on your smart phone, and every hour it gives you something else to do, and lets you know what you’re going through and what you should do.

You said you started in ’91, so that was obviously during your playing days. How hard was it to keep your eating on point during the season?

What I did was, when I played, I literally found out from people where I could eat, and how to ask the chef to make something. I went down to 219 pounds, because—everyone went, ‘You look like a match that had already been burnt.’ And I said, ‘But I’m healthy.’ So obviously the weight I lost wasn’t really weight, it was toxins holding on. My body wasn’t getting rid of meat and muscle, it was getting rid of toxins.

Wow, that’s wild. I know you’ve been following the current NBA season, have any players really jumped out and impressed you thus far?

My man Kevin Love! That’s my man, I love that guy.

Yeah, he’s putting up numbers, but they can’t get any wins.

Hey, make sure you write this: There’s a dude name Bad News Barnes, played for the Detroit Pistons. They called him Bad News. The NBA never talks about him because it was during the drug era. Bad News once said, ‘I’m a bad mothafucka, but I’m playing on a bad team.’ (Laughs.) So, it ain’t him. And he’s exposing that, too. He’s putting up numbers, now people are gonna start saying, ‘Maybe he should get his teammates involved.’ Now when I hear shit like that on television, I turn the channel. Because if he scores 40, his teammates are involved. He ain’t taking the ball out, checking it to himself, dribbling it up the floor, holding it above his head, throwing it in the air, and going to post up. They’re involved, because they’re bringing it up and he’s putting it in the hole. And like George Gervin said—he shot 51 percent for his career—he said, ‘Why would I throw the ball to a guy shooting 35 percent?’ (Laughs.) So if he’s putting in the hole, he’s doing his [part]. That’s like how they were yelling at Kobe about that shit until [the Lakers front office] decided to put people around Kobe who could also do their things, while Kobe does his thing. You know, Kobe’s my favorite player in the NBA.

Well the Lakers just lost a few games, but they still have pretty much the same team intact. Is that your championship pick?

No, I got the Celtics to win the championship.

Ron Artest doesn’t play well for six minutes last year, and the Celtics are the champion. Six minutes! The kid turns it on for six minutes and that changes the game. I grew up in Brooklyn, but I was a Celtics fan. I played for the Pistons, Miami, Toronto, Chicago and the Lakers. But as long as I was a fan of the game, I was always a fan of that green and white.

Growing up in Brooklyn, you were never a Knick fan?

Hell no. The best thing the Knicks ever did in my life was sign Bernard King. I became a Knicks fan when Bernard King was on the team. When Bernard King went on to Washington, I went back to being a Celtics fan. Albert King [Bernard’s brother] was the reason I knew I was gonna be a pro athlete. I remember seeing him—my brother took me when I was in eighth grade, at 14, took me up to his high school when Albert was playing against Canarsie High. And he came out and dropped 50, I think. Or 40-something. But watching this dude play, I told my brother, ‘I’m gonna be that.’ He goes, ‘What do you mean?’ I go, ‘You see how everybody is on his dick? I’m gonna do that.’ (Laughs.) He was like, ‘Alright, Johnny.’ I said, ‘Watch.’ And that’s it. That’s my life, right there.

I was talking to Anthony Mason last week and he was telling me about how he barely recognizes the NBA today, the way the game’s played compared to the way it was in the 90s. What do you think of how the game’s changed over the past two decades?

I just don’t like that every time down the court, the whistle is blown. And I don’t like the emotions that are trying to be taken away from the game. I think the powers that be need to step back a second. You gotta understand, I’m a businessman as well, so I understand the business. And the business is: If LeBron James signs a contract for $130 dollars, and he makes whatever he makes with Nike, and he’s walking around with an image and assets of over a million dollars, fucking right I don’t want you fighting! You’re paid to play basketball, and I don’t want you undercutting anybody or slamming ‘em in the back. I don’t mind you being physical, but I understand why they’re so touchy about it. There’s an old, old saying that the smarter a society gets, the softer it gets, because you don’t have to do any work—you’re doing all mental work. We’re becoming a softer society. Everything is inappropriate.

Right. It speaks of the bigger cultural trends.

And it’s a trip, because it’s not just the League. Sports usually definte what the society is. I mean, look how terrible it is to watch a game live at a stadium. Come on man, the fucking Garden used to be dark. The only lights were on the court. The Forum, I thought I was on Broadway. I was ready to start tap dancing when I first got there. The place was sexy. We didn’t have cheerleaders, except for the Laker Girls. I’m not saying I dislike cheerleaders; I love cheerleaders. But it wasn’t a complete show at halftime. There’s no organ anymore. It don’t smell like elephants when you walk in the Garden anymore. It’s just that shit that used to let you know you were going to see a show in the Garden. Everybody’s part of the show—they want everything interactive. Look at football now: They’re throwing red flags and saying: ‘I wanna challenge that.’ You know how many fuckin’ championships I would’ve won if we had a red flag? And that’s the society. Point, point, go to the videotape. We got you from every different angle like we did on CSI. We saw it right there. And—is that mothafucka wearing earrings under his helmet? What?! Come on. ‘Yeah man, old boy lost his earrings during the game. That’s five G’s, 10 karats.’ Fuck you wearing earrings for, punk ass?

I saw basketball players walking with security guards. I said, ‘OK, this is ridiculous.’

Yeah. Who would mess with them, anyway?

It used to be, guys gave you a pass. You were respected, because you were a hero. Now, these guys gotta walk around and watch their ass. I’m like, for what? I used to walk around—I could walk in the middle of a drug joint, and people would be like, ‘Yo, that’s Sal. Yo, you don’t need to be here.’ It’s a whole different respect.

Last question: Are you gonna be in Bad Boys 3?

(Laughs.) If there is one, God willing.

Yeah, you gotta get in there.

I don’t even know if there’s gonna be a Bad Boys 3. Will [Smith] and Martin [Lawrence], they have too much money now.