Mike D’Antoni Took the Money, and I Don’t Blame Him 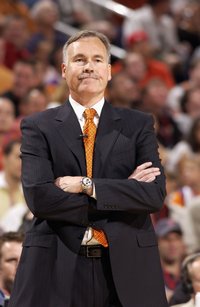 Mike D’Antoni isn’t going to transform the Knicks into winners. Not with that roster, he’s not. We know this, he knows this, Knicks fans know this, and the Knicks themselves know this.

A former associate of D’Antoni’s referred to him “the world’s greatest contrarian,” a view that makes his decision to join the Knicks a little more sensible.

“Mike’s looking forward to the challenge, and he feels he has the right resources to take it on,” D’Antoni’s agent, Warren LeGarie, said.

Replace “challenge” with “all of the new stuff that he’ll now be able to buy” and “the right resources” with “the right amount of zeros on his paycheck” and the above quote – plus, D’Antoni’s decision to take the job in New York – makes perfect sense.

D’Antoni has never seemed overly concerned with winning titles to begin with; he was reportedly angry with Steve Kerr because the GM had the gall to ask him to spend more time practicing defense, and wanted the players (namely, Amare Stoudemire) held accountable.

When he came back from Italy and started coaching in Phoenix, D’Antoni preached having fun and living life to the fullest, and he was lucky enough to have the athletes to make this possible.

In New York, unless the entire team is traded away, there will be no fun of any kind for anyone. But Mike will be smiling on the inside, all he’ll have to do is take a peek at the balance in his bank account.