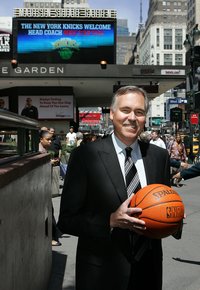 The newest Knicks head coach said all of the right things in his introductory press conference.

D’Antoni said he’ll tweak his fast-paced offense to match it to the Knicks’ roster (translation: running will be replaced by walking); that he has no problem with Stephon Marbury (translation: he’s getting out of town on the first thing smoking); and even his wife took questions from the media.

“Think fast and move the ball,” D’Antoni said about his attack. “We want to play fast. But whether we can play fast, like we did with Shawn Marion, I don’t know. We might not be as fast with Zach Randolph.”