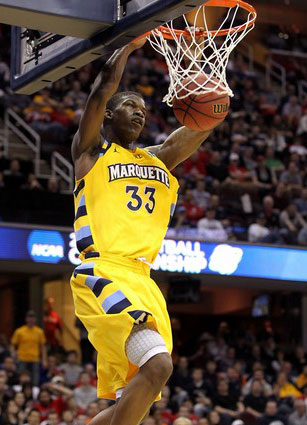 After watching the Chicago Bulls overachieve last season to the tune of 62 wins, Derrick Rose winning the MVP, and first year head coach Tom Thibodeau being named COY, Bulls fans felt the sting as the Miami Heat unceremoniously bounced them from the postseason. As well as the team played all season, in the end, their flaws were exposed and it became apparent that Chicago still has some holes to fill before they can truly become a contender for the Larry O’Brien trophy.

With the 28th and 30th picks in a draft that isn’t that high on superstar type talent, it’s doubtful that the Bulls will be able to find a player who can come in immediately and contribute. But then again, Taj Gibson was the 22nd pick in 2009 and nobody expected him to play as well as he did from Day 1, so anything is possible.

There are a lot of ways that the Bulls can go with this pick, but aside from some scoring punch in the backcout to go alongside DRose (which will most likely be filled in free agency or via trade), one of the most pressing needs is to find a capable backup for Luol Deng who is coming off the best season in his pro career. Deng lead the Bulls in the regular season and in the Playoffs in minutes played and rarely came out of games because his contributions, especially on the defensive end, were so vital to the overall success of the team. But you have to be able to rest him at some point. So…

With the 28th pick of the SLAMonline Mock Draft, the Chicago Bulls select…

Butler is a lot like Deng in so many ways.

Both players are 6-8 and neither is going to wow you with their athleticism, but where you become impressed with them is in their basketball IQs, they way they hustle, rebound, make the right pass, and do all of the little things that contribute to the success of their teams. Butler can come in and make Coach Thibodeau comfortable enough to spell Deng for longer periods of time without worrying about any drop off, especially on defense which is what Thibs will absolutely love about him.

Jimmy Butler is very disciplined in that he doesn’t get caught out of position too often and he’s excellent with regard to basic fundamental principles on the defensive side of the ball. His long wingspan gives him the ability to challenge shots and also makes him a threat when it comes to playing in the passing lanes.

On the offensive side, since being at Marquette, Butler has shown the ability to put the ball on the floor in one or two dribbles and get to the rim and finish, or pull up and shoot. He can also hit the spot-up jumper and can catch-and-shoot on the move with decent accuracy as well. His three-point shot out to NBA range isn’t quite there, but that’s not what you’ll have him on the floor for anyway. His basketball IQ and shot selection is solid and he seems to have a knack for being able to find holes or cushions in the defense that make it easy for him to score.

And even though he lacks an elite level leaping ability, he still hustles on the glass and makes an effort to rebound the ball.

Jimmy Butler comes from a program that has produced NBA-level talent for years, the most recent being former teammates of his in Wesley Matthews of the Portland Trail Blazers and Lazar Hayward from the Minnesota Timberwolves.

Having to compete against those guys in practice and also in the summers has definitely contributed to making him NBA ready. Plus, being under the tutelage of Thibodeau and learning from Luol Deng will only help him improve and the things he’ll pick up should serve him well and keep him around the League for a very long time.