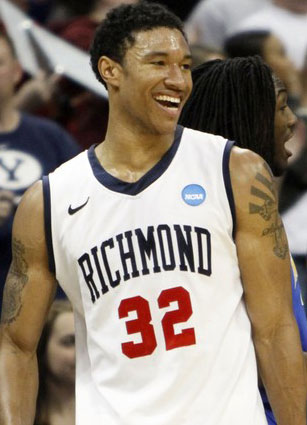 Basketball is about getting players. Tall, short, thin, large; they all have their advantages on the court. While it should be a given that you need players of all height and size, the pigeonholing of players into positions like “small forward” versus “shooting guard” is a bit outdated around the offices here at the Oklahoma City Thunder. We want players of all sizes, but first and foremost, we want guys who can play. As our boss always says, “just seconds into any NBA game, Earl Boykins could be matched up on Yao Ming!”

After a Thunder season that should be remembered for progress, growth and a now prominent role in the ever-expanding national professional basketball narrative, the pieces are already in place. We have a scoring savant (Kevin Durant), an explosively precocious floor general (Russell Westbrook) and a cast of budding stars (James Harden/Serge Ibaka) to go with a deep bench. The cherry on top of our embarrassment of riches is the fact that our two All-NBA players are just 22 years old and our starting five boasts an average age of just 23. KD and Russ are just learning how to not only handle the grind of an NBA regular season, but also how to lead their team to a deep Playoff run. While a Western Conference Finals appearance was surely an achievement for our players and amazing fan-base, we have expectations for the next decade beyond even our own wildest of dreams. Our core is not going anywhere and most of what we actually “need” could only be replaced with veteran free agents to give us some experience and grit.

For the first time in our brief history in the country’s heartland, the NBA Draft is not priority No. 1 in the offseason. We have mountains of games recorded. We’ve watched them all and we have figured out our list of the best players. No mocks. No services. Just an inventory constructed by a group that has largely ignored those lists that litter the interweb this time of year.

With 23 guys already taken off our board, the “pickins” is obviously getting slim, but there was just one name remaining in the Draft that we had in our top 15.

With the 24th pick of the 2011 SLAMonline Mock Draft, the Oklahoma City Thunder select…..

Justin Harper from the University of Richmond.

We had our eyes on this kid last year before he decided to return for his senior season. A year in which, the 6-9, 230-pound forward led his team into the national tournament’s Sweet 16 with an effective mix of inside-outside game. Harper’s last season in his hometown, Richmond, produced stat-lines of 18 ppg, 54 percent from the field and an efficient 45 percent on a high-volume of attempts from long-range. With the bulk of our current roster locked up into long-term deals (Russ’ rookie deal expires in two years, but a renegotiated deal is both imperative and imminent), we are in a fine position salary cap-wise.

Harper will give us more depth at the forward spot, as the kid can spell KD for those few minutes that No. 35 spends on the bench. In addition, Harper can defend both forward positions so he would add depth to the frontcourt of Nick Collison, Ibaka and Kendrick Perkins (Nazr Mohammed is our only expiring contract; we might have to let him walk). Granted, Harper may not be as athletic as many and not possess the rebounding tenacity of a Kenneth Fereid.

But, more than anything, Harper can play the game.