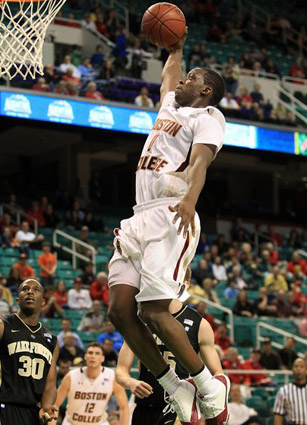 At this stage in the 2011 SLAMOnline NBA Mock Draft, the list of available prospects should be called “The Expendables” because every single one of them has a question mark that makes me want to pass on them. Kenneth Faried was the pick I wanted as Virtual GM of the Houston Rockets but he was snagged one pick ahead by Denver. It’s unfortunate, because he’s the prototypical Rockets player. Note to self: We won’t be vacationing in Colorado this year.

The positive of this scenario is that it gives fans a somewhat realistic amount of insight into what a team has to do when their odds-on pick slips through their hands. Here are five players on our radar that we considered but ultimately passed on.

Josh Selby, SG, Kansas- Coming out of high school, Selby displayed blazing speed and scoring ability. Injuries and an inability to fit into the Jayhawks system raised eyebrows. Few players possess the ceiling of Selby but there is plenty of reason to believe he won’t get off the ground.

Tyler Honeycutt, SF, UCLA- Honeycutt possesses great instincts and can be a defensive stopper. His stock would have risen greatly with one more year in college to polish his offensive skill set. Unfortunately for Honeycutt, we already drafted Chris Singleton so there is no more room on the Rocket ship.

Keith Benson, Center, Oakland- Big man who is a double-double waiting to happen, but gets pushed around too much due to a lack of lower body strength. Texas’ Tristan Thompson owned him in the NCAA Men’s Basketball Tournament. Imaging what Dwight Howard would do to him.

Jimmy Butler, Small Forward, Marquette– Again, we are stocked full of small forwards, but Butler’s hustle and team-first attitude makes him stand out. He makes up for his limited athleticism by making the open shot and right play with regularity.

Donatas Motiejunas, Power Forward, Lithuania- A Lottery level player with a shot that can bring defenders outside. Unfortunately, he appears to be an egotistical player without heart that plays matador defense. The Rockets need someone tougher and more mature than that.

See what I mean? The holes in each player’s game have us asking more questions than Kris Humphries is to Kim Kardashian right now. In the end, we decided to go with a name familiar to sports fans, albeit on a different playing field.

With the 23rd pick in the 2011 SLAMOnline Mock Draft, the Houston Rockets select…

A point guard with speed and scoring ability that has drawn comparison to Russell Westbrook, Jackson could be “the straw that stirs the drink” off the bench. He averaged 18.2 points, 4.3 rebounds and 4.5 assists last season, which is a solid stat line for a player still learning the position. Even now Jackson has established himself as a dual threat, able to play within the framework of a game-plan geared toward another scorer while also giving defenders headaches with steady shooting and the ability to get to the basket at will. Seeing is believing though, so here’s a taste of the athleticism that the Rockets would be getting.

I don’t give a damn if that was an offensive foul. Any player who has onions big enough to make that play gets points in my book. Imagine what a play like that could do to energize the crowd at the Toyota Center? It would be Carl Landry 2.0.

Jackson’s also the type of player Jay Bilas will develop a man crush on due to his length as a player. At 6-3, the Eagle has a seven-foot wingspan. Match that with his instincts and speed, which there are plenty of, and Jackson can become a pesky defender in the Rockets’ rotation.

What impresses the most is Jackson’s exponential growth as a shooter. He shot 43 percent field goal percentage and 30 percent from behind the arc as a sophomore; then improved those numbers as a junior to 50 percent from the field and a 43 percent three-point percentage. Think he spent some time in the gym? Me too.

Continuously improving at the position, Jackson will have the luxury of learning on the job as a backup. Kyle Lowry put his stamp on the starting spot at the 1 and his fearless playing style will rub off on the rookie. We already discussed the notion of “The Expendables” with the NBA prospects. Choosing Jackson will allow Daryl Morey to do his best Sly Stallone impression within the Rockets organization. If we want to keep Goran Dragic, a restricted free agent, we can. If not, we have more back-ups to score with than Derek Jeter.

The chief concern with Jackson is a reported minor surgical procedure performed on his knee in mid-May. If he can prove to scouts that the surgery isn’t an issue, there’s little reason to pass on a player who has the potential to rise much higher than the rim he rocked often at Boston College.