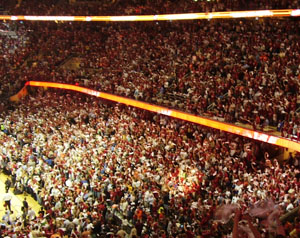 It is sometime after 10 in the morning. Usually I’m up early writing something for this site, but not today. Blame the media hospitality area and my poor sense of direction. Lang and I were the only two people on the streets of Cleveland at 3:30 in the morning, wandering around trying to figure out where east becomes west. If I were to extend that to an NBA metaphor, I would say something about how in the 2007 NBA, east never meets west. West smothers the life out of east, and it’s not pretty.

Lang posted the live game notes he was working on during last night’s game, but since it’s the Finals, everything is bigger so you get double coverage. These are some supplemental thoughts, coming from someone that has never been to the NBA Finals before.

There was excitement and electricity from the fans in the air. Let’s try to remember that. They had hope. And thousands of t-shirts with phrases like “Got Boobie? We do.” My favorite bootleg t-shirt of the day was a Cavalier uniform on the grim reaper. It turns out that it was some kind of tribute to SLAM art director Stephen Goggi’s favorite band, My Chemical Romance. I do not listen to their music, but I can tell you that the emotional feeling of this city right now is like being at the black parade.

Inside the locker rooms, the media throng earned its reputation as a throng. Not much personal space. Here’s your insider snitch report: Ira Newble walked by LeBron, and they gave each other a pound. No lingering hostility from the whole Darfur petition situation there.

Lang already wrote about this, but when I heard David Stern say “Holy Moses!” it was a great moment. Sometimes when you meet a public figure, they aren’t in character and it can be a letdown. Stern played the David Stern role perfectly. I haven’t been that impressed since I saw Redman smoking back to back to back blunts in the back of a rap club 10 years ago.

Our pre-game meal was full of laughter and overindulgence in free food. This is turning into a very dangerous trend.

We got to our seats just in time for the pre-game FIREBOMBS. The ovation when LeBron’s name announced was actually deafening. There were goosebumps. Great work there Cleveland fans!

Yeah, well… Duncan missed long stretches with foul trouble, and other than a hot start he never did much himself. He set up teammates well, but didn’t have a dominating game. Manu did nothing for the first 47 minutes on offense. Tony Parker was spotty. Big Z was energetic and on the attack, trying to get Duncan into foul trouble. The Cavs were dominating the glass. LeBron was not afraid to attack Bruce Bowen, and throw a superstar elbow now and then. He also did a great job of finding wide open teammates behind the three point line.

So how did the Cavs lose this game?

Because their shooters could not shoot straight. BOOBIE! There is going to be a massive T-shirt bonfire later tonight. Now I know why there is a huge smoke stack outside of the hotel.

Something else that Lang mentioned quickly, that will not translate through writing, but needs to be brought up again: Fabrrrrrrrrrricccciooo Oberrrrrtto. Say that name to yourself with the deepest tone and most over the top R-rolling Spanish accent you can. We were begging for Oberto to score or pick up a foul or something just to hear the announcer say his name.

And so, the game came down to the Cavs having a chance to take the big shot. LeBron gave the ball up to Varaejo, expecting to get it back. A guy nicknamed “Sideshow” felt like with the season on the line in the NBA Finals, it might be a smart idea for a hustle and defense and charge-taking role player to attack one of the premier shot blockers in the game with 13 seconds left on the shot clock. The look on LeBron’s face was, dare I say, Jordanesque. I could feel the heat daggers burning into Anderson from the back row of the press box.

The Cavs had their chance to tie with a three. Bruce Bowen went to foul to send LeBron to the line and stop the Cavs from taking the three. The refs decided to just wrap up the inevitable early. He should have passed the ball to Donyell Marshall in the corner anyways. LeBron, so selfish taking that shot for himself. I am kidding. Guess what? The Spurs are the better team. Pretty funny that they didn’t call the foul when the Spurs were clearly fouling for strategy.

And finally a thought on Mike Brown’s coaching, which will use a Sopranos finale analogy. It’s like Mike Brown is David Chase and LeBron is the viewing public. Brown gives him a blank screen and it’s up to LeBron to figure it out for himself.

Lots of hanging around, seeing the faces you’d expect to see, drinking/eating for free, working hard. Vegas > Cleveland. Yeah I said it!!!

We’re going to practice in about an hour. Congrats to the NBA champion San Antonio Spurs, although we’ve known they would be champions ever since game 5 against the Suns, which feels like about 8 months ago.