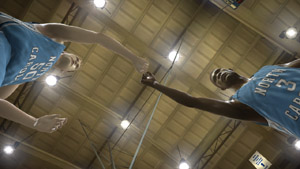 I made three new friends yesterday. Raymond Felton, Emeka Okafor, and Adam Morrison. All three of them play for the Charlotte Bobcats as you know, but they have something else in common. Each one has been on the cover of EA Sports NCAA March Madness. They’ve been the last three covers. Observe.

They’re in town to play the Knicks tonight, and spent much of yesterday fielding questions from the media. I have been to one of these things in person, back when I played Donovan McNabb in Madden before the ’05 NFL season. He has not played a full season since that day. My special crippler claw handshake worked. So, yesterday I didn’t go to wherever they were, but EA was nice enough to give me some phone time with each one of these guys. I spoke to them about video games, basketball, and the place where video games and basketball collide, which is basketball video games.First up was Raymond Felton. This interview was the shortest because Raymond’s cell phone didn’t have the best connection and it was killing my ears.S(L)AM: Hey Raymond. How often do you play video games:

S: As someone who is in the NBA, do you find you play a college video game different than you’d play a pro game?

Felton: Not necessarily. I try to play the same way. With Carolina I push it the same way I do here. In the game or when I play for real.

S: What do you think of UNC right now? They’re supposed to be rebuilding and they’re #1 in the country right now.

Felton: They’re young but they’r doing just fine. Even if they don’t win it all this year, I ain’t worried about them. They’re gonna go a long way and next year they’ll be more experienced

S: What do you think about Hansbrough?

F: He’s a great player man. And they’re so deep as a team.

S: Do you talk to him about the decision to go pro when that day comes?

F: No No No. I don’t get into all that. If I see him, I give him advice on the college game and that’s it.

S: I guess you don’t have that far to go to see him. So how would you say your season is going?

S: Do you talk to Emeka and Adam about being on the cover of the same game?

F: It’s funny. Just one of those things.
S: No cover jinxes or anything right?

S: Thanks for your time.

The Cellphone reception added a million “Huh whats?” from both of us. Let’s move on. Up next is Emeka Okafor.

S: Nice relaxing day for you?

S: Are you playing right now?

S: No, not in real life. Are you playing a video game right now?

E: You know what, it was UNC vs. DUKE, so I really wasn’t into it to begin with. I got into it the middle of the game and it wasn’t my alma mater, so. (Trails off)
S: I think I know who didn’t win. What do you think of UCONN this year? They lost all of those starters.

E: We lost a couple of games early but it’s a young team learning. The Big East is tough competition night in and night out, they’ll figure it out.

S: How would you critique your own season right now. All-Star?

E: I would like to have more wins than we have right now. We’re playing hard we’re trying to find our way. Our record doesn’t really reflect how hard we’re playing and how good we are. We’ve been in a lot of games and we lost a couple of close ones. We could have 6 or 7 more wins.

S: Big win over Detroit though.

E: We beat the big dogs, you know?

S: Do you find some personal validation that you’ve come back from inury and you’re playing better than ever?

S: What would being named to the All-Star team mean to you?

E: That would be a great accomplishment to say that you’re one of the league’s best. I dont really think much about it though. I’m just trying to get some more wins.

S: Tell me about your video game playing.

E: I pay a pretty decent amount. A little bit of everything. I used tot be tough on the RPG games way back when. Like Final Fantasy, and way back when the one that got me going was Chrono Trigger.

S: I’ll give you a recommendation for a game you might like. Civilization IV. You start out as a caveman and you end up building spaceships or whatever.

E: Yeah. (Slightly awkward pause.) I like RPGs and sports games, Madden, all that stuff. I’ll play Halo when I get my confidence up. But you go online and just start getting killed.

S: You play online? With teammates?

E: Yeah, sometimes. Adam’s pretty good. I don’t want to play with him cause I don’t want the risk of embarrasment or trash talking. He’s a level 35 or something.

S: Do you talk to these guys about how you were the first one to have a cover and they just followed you?

E: Not really. I know it’s just a timing issue.
S: It’s pretty weird that three guys on the same NBA team would be on the covers like that?

S: Do you prefer college or pro?

E: I like NCAA basketball, it’s fun. I like the attention to detail. Just playing UNC vs. DUKE right now, the UNC court is pretty accurate. It looks just like that.

S: Do you think the gameplay is realistic too, not just the graphics?

E: Yeah, there’s a true homecourt advantage. The fans get involved, they cheer. It gets more intense, if you shoot an airball they start taunting. Crowds are brutal like that and they captured it for the game.

S: What about the NBA crowds?

S: Speaking of corporate people, what’s Michael Jordan been up to?

E: He pops in every now and then. He kind of works in the background makes sure we’re all working hard.

S: One last thing, tell me about the play of Matt Carroll. People on our web site love him. They’re obsessed with this guy.

E: Yeah Matt! He’s doing is thing. He shows up at the opportune time for us, making big time shots.

S: Alright, thanks Emeka. Have fun.

And finally, the mustached one, Adam Morrison. A guy that I know for a fact, is serious about gaming.
S: What’s going on Adam. How you doing?

S: You and JJ Redick were playing online a lot last year. Do you still do that?

A: Yeah, me and him get on every once in a while. Obviously it’s tough with the schedules now.

A: But in the summertimes we’ll get on and play a little Halo and stuff.

A: Yeah, it’s pretty much the game of choice. I’ts a fun game.

S: Do you have all the new consoles?

A: I’ve got the 360 and I haven’t had the chance to get a PS3 yet. I’ve never really been a Playstation fan. I haven’t had a chance to try the Wii but from what I’ve heard it’s pretty good.

S: Except when people throw it into their TV by accident.

A: You know, I like the idea of interaction, but in the same respect I kind of want if I’m playing a game to just sit there.

S: Your job is so physical, you probably just want to relax and chill.
A: Yeah, if I want to go out and do a first person shooter, I’ll just go piantball, you know what I mean?

S: They’re coming out with a darts game.

A: Why wouldn’t you just play darts?

S: How do you feel about being on the cover of the game? Honored and excited about it?

A: It’s cool. I’m a big video game fan, so to see myself on a game it’s just a cool thing for me. EA makes a good product so it’s also good to be on a good product.

S: You’re not in the game though.
A: It’s all last year’s rosters.
S: Can’t have a college player being paid to be on the cover of a game.

S: How would you say your season is going now in real life?

A: Good. To a point I want to be more consistent shooting. The wins and losses I’d like to change. But I think we’re a hard nosed team. We’re playing hard and we’re pretty young so it’ll be fun to grow with these guys and try to figure out a way to lead in the future.

S: Are you going to be in Vegas for All-Star at the Rookie game?

A: I haven’t heard anything yet, but hopefully I’ll be in.

A: It’s been tough. But it also makes you more competitive and more driven. It’s cool that we’ve got a bunch of young players and we can be something special down the road. People kind of have to remember that we’re a young organization, only three years into it. I don’t want to use that as an excuse but it’s tough when you’re relying on guys that are one or two or three years in the league. This league is all about consistency and that’s one thing we’re struggling with right now.

S: What’s Jordan’s influence? Do you see him around?

A: We see him around. Its good cause everybody knows what he did on the court and his presence is going to help the organization and his great basketball mind. His decision making is going to help.

S: How has your life changed since you became an NBA player?

A: Obviously financially it’s changed for the better. But as far as everythig else I try to keep it as normal as possible. As far as off the court stuff, I try to just saty pretty grounded and keep up with everybody back home.

S: Any other video game reccomendations?

A: NBA Live. College basketball. Halo. That’s pretty much all I get on. I’m a big fan of FIFA soccer. That’s my sports game of choice.

S: Did you see the David Beckham contract?

S: You’d have to play 2 or 3 careers or something to make that.

A: Isn’t that double what KG made on his one contract? It’s ridiculous. For 5 years too. He’s probably got more years under him.

S: You gotta play a new sport or something. Thanks for talking. Good luck.

And there you have it. The young, video game playing Bobcats. Cover boys. Sean May must feel really left out.