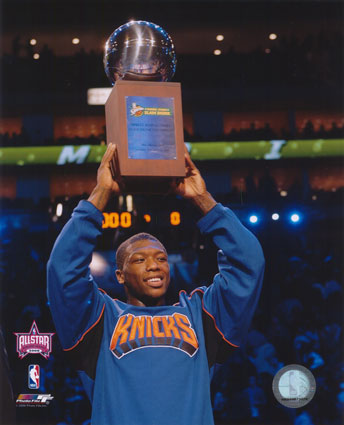 “I’m honored to have been selected MVP but more proud of my teammates and going 5-0,” said Robinson who finished the week averaging 19.6 points, 6.0 assists and 3.6 rebounds. “It’s been a great week for us.”

-Chris Paul, a Blazer in 2009 ? Those guys in Portland sure do love to dream.

-I totally forgot that the ESPYs were on last night (damn it!), but it appears that LeBron did a little Bobby Brown impersonation. (Via: TBL)

Good to see that the nail-chewing doesn’t stop when he steps off the basketball court. (Care to guess where else he chews his nails in the comments? Please, try to keep it clean.)

-The Nuggets like what they’ve seen from Von Wafer so far. Must be a different Wafer than the one I saw stinking up the joint when he was a Laker. Hey Von, thanks for blowing up AFTER leaving the Lakers. Thanks a lot.

-Larry Johnson, one of my favorite players of all time, talked about the Knicks and how the fight against the Nuggets cost him money since he had bet on Zeke’s squad making the postseason. (Via: Poasting and Toasting)

(By law, whenever LJ is mentioned in a post, I must link to his infamous four-point play against the Pacers in the ’99 Playoffs. The shot of MSG rising as one always gives me chills.)