NBA Final Four Set. So much to love, so much to hate. 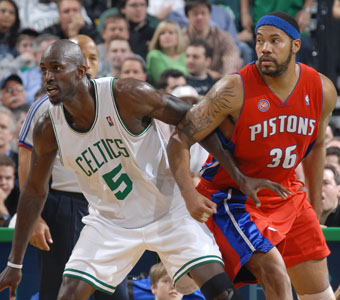 Well, well, well. Here we are. Since there have been so many huge upsets in sports in recent years, people have come to expect surprise match-ups in the later rounds. Not this time. You knew the East was going to come down to Boston-Detroit, and had a pretty good idea that the West would be San Antonio-L.A. It wasn’t always obvious as events unfolded, but if you detach yourself and try to see the big picture, you knew this was coming.

The Celtics haven’t even faced an actual basketball team in the playoffs yet, and it’s taken them the max amount of games. Atlanta is a collection of young athletes and Joe Johnson. Mike Bibby didn’t even do that much and a team that barely got into the playoffs went to a game seven with Boston. The Cavs are even worse than the Hawks talent-wise, except LeBron is so dominant, he makes them a threat to beat anyone. A threat, not a serious contender that should be respected. The “Big Three” should have squashed the Cavs.

Ah yes, the “Big Three.” It’s one thing for a guy to get old or worn down from a long season. Ray Allen, one of the best jump shooters ever, can’t hit wiiiiiiiiiiide open threes right now. Not even at home. And this is a guy who prepares and hones his craft like a serial killer. Paul Pierce is coming off a game 7 for the archives, but he’s been hit or miss so far. KG, someone who got MVP consideration because he changed the culture of a tanking team to a winner, screamed at bench warmers all year, stared at people with a lot of intensity, has been shall we say, underwhelming, particularly in big spots. I know the whole “Dominant player HAS to have the ball in crunch time” thing is overblown, but what’s the deal with all of the 20 footers, the 9-step turnaround fadeaways, the passing without making an inferior defender make a decision? The “Big Three” has some work to do.

And on the subject of Big Threes, is KG-Pierce-Ray that much better than Sheed-Chauncey-Rip? Is it better at all? KG is a better player than Rasheed, he’s more consistent with his effort on both ends, but when Sheed is motivated it’s close. Right now, Rip Hamilton might be better than Ray Allen, even Ray with his confidence restored. Chauncey vs. Pierce, I can see either way. Chauncey IS that down the stretch guy, and he orchestrates more for the Pistons than Paul does for the Celtics. When you get past those three on either side, there’s Rondo, who goes from superstar to bust on a quarter by quarter basis. The Pistons have Tayshaun Prince, who has done it on this stage a few times. From there, I’d say the Pistons have a superior roster, and even the at times shakiness of Flip Saunders won’t matter up against Doc Rivers.

Question: What happens if Detroit wins one of the first two games in Boston?

Answer: All hell breaks loose. The Celtics have to win a road game at some point… or do they? Boston, enjoy that Jon Lester no-hitter.

Out West, it’s very simple… you have your old school heroes vs. villains showdown. I love it!

Many basketball fans have a weirdly personal attachment to Kobe Bryant. LOVE! HATE! LOVE! HATE! LOVE! HATE! The trend for the majority has been people loved his game, hated that he was winning so much at such a young age, hated his personality, loved to hate when he got arrested, hated the selfishness, loved the dominance and amazing performances, hated the business aspect manipulations, then slowly started to forgive him as time passed, and now it’s mostly love for team-first Kobe, other than the haters who have their own personal agendas I’m sure. It’s weird, he’s a famous basketball player, the son of a famous basketball player who has known he would be a global superstar since he was like 12 years old. It would be more surprising if he were a “normal” person.
But anyways, who is Kobe facing in this attempt to get back to The Finals? Why, it’s public enemy #1! The San Antonio Spurs, a team so despised for many reasons that are one. They win. Modern professional sports has been all about individual millionaires causing stupid drama, getting into cat fights, jail cells, excessive purchases, ramped up controversies, etc. People cry about how the world is going to superficial hell, and the Spurs are the opposite of all of that.

Yet they are the hated, because they do whatever it takes to win. I know, I hate them too. Last night, Ime Udoka was giving up his body, grabbing crucial offensive rebounds, doing everything it takes to win game sevens on the road. Ime Udoka! He’s like their 9th best player! Also, there’s the constant whining by Manu, the huge eyeball face of disbelief by Duncan, Bruce Bowen’s “stuff”, Robert Horry’s borderline “stuff”, and oh the flopping. The Spurs are annoying, but a great team. A worthy defending champion.

And now the Lakers must get past them, as the “good guys.” Interesting role for them, since they are the Hollywood team, since they only got to this position by the amazing trade for Pau Gasol, which sent Pop into one of his wine bottle smashing rages. It was the best, most unfair acquisition of an NBA player since the David Robinson injury brought the Spurs Tim Duncan! There is a lot of history between these teams. The Laker threepeat ended with a blowout on their home court at the hands of Duncan, when Kobe cried on the bench. The next year was Derek Fisher and 0.4. Phil Jackson is looking for another chance to go for his 10th ring. There are storylines. What to expect from this series? I’m not ready to think about it yet, and this has been long enough already.

Congrats to the Spurs for setting up what should be a great Final Four. Even though I watched the game with 20 people, and we all wanted them to lose. I am looking forward to the Conference Finals.