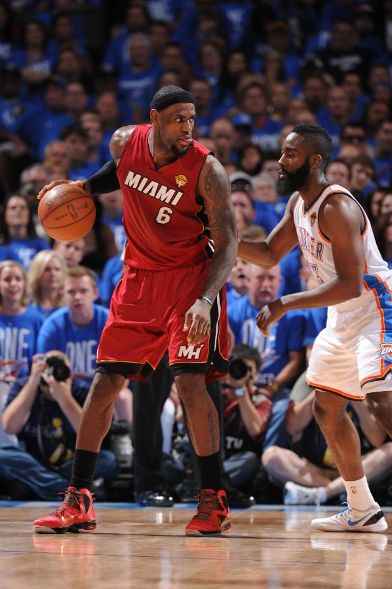 Depending on whether or not the teams are traveling between cities, an off-day during the Finals means a practice day, and from the media’s perspective a practice day means you’re getting four things: 30 minutes of one squad’s practice, 30 minute of media time with that squad’s players, and then the same two sessions for the other squad. Simple enough, eh? We’ll get to each of those four in a sec, but beforehand here’s a little regarding what’s going on around these parts at the moment:

It’s gray and cloudy around downtown Oklahoma City today, which seems to be a bit of a theme—it was gray and cloudy yesterday, and it was gray and cloudy for the entirety of my two-night stay here back in December. Whereas yesterday everybody on the streets was wearing Thunder gear, today that’s toned down a bunch; there’s a lot more business casual gear going on, with the occasional royal blue ONE THUNDER tee sprinkled amongst the bunch. Many of those button-upped folks are here for a “state school administration and education conference,” which has taken over the massive Cox Convention Center that stands directly next to Chesapeake Energy Arena.

Anyway, the day’s first session consisted of the final 30 minutes of Thunder practice, during which actual drills were run—not always the case, as you’ll learn in a bit. When we walked in, the team was practicing its pick-and-roll offense, running a simple p-and-r at the top of the key and then figuring out working on the passes that find open guys at various places on the court after the defense switches. First they focused on locating a big guy down under in the hoop, then on dishing to a shooter in the corner, then on passing to a swingman on the elbow.

Afterward, the “bigs” and the “smalls” split up by half (Kevin Durant hung with the smalls) and the big men practiced running jumphooks—”You can’t make it all the way!” an OKC asst. kept shouting, implying that an opponent was blocking the lane and forcing the Thunder forwards/centers to loft shots over an imaginary defender—while the small(er) fellas worked on catch-and-shoot 3-pointers. Then both sides shot free throws, and then both sides shot mid-range jumpers, and then it was over.

The media sessions during these things are always a zoo, as reporters clamor around players and players are extra careful not to provide even the slightest damaging nugget of information.

KD spoke on media criticism—”I don’t want to sound like a jerk or anything, but I really don’t care what people say outside the locker room, outside of this organization”— on the difference between last night’s halves—”Only adjustment we made was playing harder. I can tell you guys Xs and Os and the schemes, but it just comes down to playing harder”—and on his standing amongst the greatest Washington, DC hoopers of all time—”My goal as a kid was to be the best player ever in my area. But I don’t think I’m up there with those guys, Elgin Baylor and Dave Bing and Adrian Dantley and guys like that, yet.”

Meanwhile Russell Westbrook defended his sense of fashion (“I just got a style of my own, and I’m going to keep it that way”), Scott Brooks pretty much just reiterated that his team’s effort was its biggest advantage, and Kendrick Perkins gushed about his coach’s status as a humble, regular dude, proving it by noting that Brooks drives a Corolla.

Derek Fisher also said something interesting, mentioning how OKC’s youth helps the squad maintain its poise, because none of the guys harp on missed opportunities or bad calls or anything like that. They just keep moving, as if they’re too young to bother focusing on anything but what’s to come, as opposed to what’s already taken place. It reminded me of little children—I don’t have any, but I believe most parents would tell you that the thing with kids is that they forget, and they forget quickly. One minute they’re really mad and upset, and the next something happens and it’s all lost as a part of a forgotten past. It sounds a little insane, but the Thunder are kind of like that, or at least they’re more like that than all of the other teams in the NBA.

OKC’s media session was followed by Miami’s, which was relatively unexciting; the theme of it was that the Heat need to exert more will and energy down the stretch, and if a few plays went differently they could’ve easily had a victory on their hands. True enough. At one point, a reporter asked Coach Erik Spoelstra if he could ask a “second-guess” question, and Spo responded by saying yeah, that he’s “used to that world.” At some point later he also said, “We live in a different world probably than most teams,” which works as a nice segue into the Heat’s practice session.

Here’s why: The Heat’s practice session didn’t really consist of any serious drills. The players mostly moseyed around the court, lobbing shots at the hoop and cracking jokes. In the final few minutes of what we were allowed to see—before the media was escorted out—the guys circled up, surrounded a trainer, and did some stretching. And that was it.

Of course, it was probably because these were only the opening minutes of the shoot-around , so the guys needed to warm up a little, but it’s a bit of a theme with the Heat—since the media coverage is so intensive, they have to hold on to what they can. In the locker rooms last night, OKC’s whiteboard listed a bunch of keys to the game and some potential defensive matchups, while Miami’s was blank. Not that it’d stay that way; once the group of reporters left it feels safe to assume one of the coaches outlined of a rough game-plan on there. But lest a journalist tweet something Spo & Co. didn’t want to hit the information highway, whatever info is considered valuable is kept secretive. If I remember correctly, this practice began during the Finals last year, when something on that special whiteboard was tweeted and a plan of some sort was revealed to the world a little prematurely.

For the Miami Heat, this is the world they live in, and they adapt accordingly.

Anyway, that’s all I’ve got. I’ll be back on here for tomorrow night’s game, liveblogging the action once again. See you then.