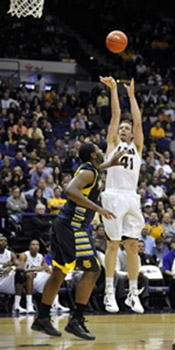 Looking at the NBA’s early entrant list that came out last month, most common college basketball fans would have been asking themselves, “Who is Justin Hamilton from LSU?” Honestly, it’s a fair question.

LSU struggled this past season and Hamilton was only there for a year, posting averages of 13 points and 7 rebounds per game. Head coach Trent Johnson was fired and Hamilton decided to pursue his NBA dream.

“I decided that I was going to take the next step in my life,” he confidently said. “I wanted to prove myself against the best and wanted to go to the NBA to show what I could do.”

Hamilton comes from the famed Lone Peak HS in Utah that is now sponsored by Under Armour and boasts big-time junior Nick Emery. The 7-footer won a state title and accepted a scholarship to Iowa State. He was a work in progress throughout his high school career, but showed consistent improvement.

At Iowa State, he played alongside current 76er Craig Brackins on the front line and was solid, but not

spectacular. Former NBA cult figure Fred “The Mayor” Hoiberg was brought in as the head coach of the Cyclones, Hamilton opted to take his talents to LSU.

“My game has evolved a lot since I was at Iowa State. I’ve worked on different moves and just how my body moves,” explained the 260-pound center. “At LSU, they were great working with me at all aspects of my game, including my shooting. It just took my game to another level.”

Honing his skills at Impact Basketball in Las Vegas before the Draft, it was clear to everyone in the gym that Justin offers a lot more than what we saw in Baton Rouge. Only shooting 3-12 as a junior from the collegiate three-point line, it makes you wonder what his former head coach Trent Johnson was thinking because there may not be a better tall shooter in this Draft. In fact, the main selling point that he’s had to NBA teams throughout the workout process is that he can come in and be a legit 7-0 pick-and-pop threat. After watching him shoot 39-50 from NBA range, it’s easy to see that happening.

Not just a shooter from beyond the arc, Hamilton takes up a lot of space inside with his wide body. Teams are of course concerned with his explosiveness (both laterally and vertically), but he’s pretty light on his feet and shows really nice footwork on the blocks. If you’re expecting a guy to drop step and bang on you, Hamilton isn’t your guy. If you’re looking for a guy who can stretch the D or shoot a soft turnaround over either shoulder, Justin’s a guy who you have to look at.

What makes the 22-year-old even more appealing is that he has dual-citizenship with the United States and Croatia, meaning that he can easily be drafted in the second round and then stashed overseas for a year or two to develop. There’s considerable buzz around surrounding Hamilton late in the second round and some have said that Boston really likes him with the 51st pick. Drafted or not, Hamilton is willing to do anything necessary to play in the League.