Nene Says Wizards Must ‘Take Their Heads Out of Their Butts’ 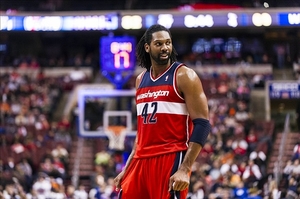 The season began with so much promise, and heightened expectations for the Washington Wizards. Once they hit the court, however, things quickly soured.

The Wizards have lost three in a row, and are off to an ugly 2-6 start. After last night’s 92-79 beatdown in San Antonio, Nene said some of his younger teammates are playing selfishly, and the big fella colorfully implored his squad to play the right way.

“They kicked our butts in the most classy way — playing the right way,” Nene said, fuming following the clinical destruction of the Wizards by the selfless Spurs. “It’s crazy, that’s what makes me mad. Our young guys think they’re so smart. But if I was young, I would watch video of that game for one week to see if I could learn something, because the way they play is how you’re supposed to play.

The only positive to come out of the Wizards’ performance, is that they forced Tim Duncan into a career-worst 2 points on 1/12 shooting.

Nene should perhaps adopt a more philosophical approach to things. After all, the Wizards have been terrible in San Antonio for a very long time — Washington has lost 15 straight games when visiting the Spurs, dating back to Dec.11, 1999.