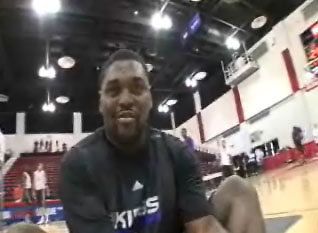 The NBA summer leagues are a chance for guys outside the show to play with the millionaires. Besides giving the mostly first and second year NBA studs a solid, hard fought workout, the free agent guys who have good runs in NBA summer ball will be in better position for foreign contracts. Others, however, are present for pure novelty.

This season, Daniel Artest, the super-chunky little brother of Sacramento Kings badass, Ron Artest, was lucky enough to make the Kings Summer League squad. In two games with the Kings in Vegas, Young Artest averaged a sole point and a strong one and a half rebounds. Of course, it wasn’t Daniel’s game that made newspaper ink. While Daniel did his best to make Ron Ron proud, the Kings big man was pondering more pressing matters.

Hate him or love him, Daniel Artest isn’t the first little brother (or big brother) to take advantage of their brothers NBA success. In fact, he is one of four siblings of NBA superstars to play summer ball with his brother’s team in recent memory. Sadly, though, it’s hard to say what they’re getting out of it.

David Webber (Indiana Pacers, Summer ‘02)
During the 2002 Summer League in Orlando, Chris Webber’s little brother, David, actually ran with the Pacers, a team his All-star sibling has never played for. That summer David was invited to the Sacramento Kings training camp, a team his brother did not play for. Although he was the Mid Atlantic Conference’s 2001 “Player of the Year” at Central Michigan, David’s pro career was short lived. Despite averaging 17 points-per as a senior, his scoring touch didn’t translate well into pro-ball. He played just 5 games in the USBL in 2003 and split the next winter between the D-League and CBA. Unlike his older brother, David was just another averaged sized fella trying to go to the NBA. He hasn’t played pro ball since 2003-2004.

Zach Marbury (New York Knicks, Summer ’04)
Moses “Zach” Marbury looks more like his older brother, Stephon, than the Coney Island point-God himself. He spent three years at the University of Rhode Island, only eligible in two, before making an unsuccessful run at the NBA Draft in 2001. Since then he’s been pretty absent from the hoops landscape. Some scattered ABA and USBL games aside, Zach or “Moses,” as he is calling himself lately, never really caught on as a professional anywhere. The height of his fame was either when he posed for a number of original K1X ads in SLAM or when the Knicks brought him to Long Beach for summer league in 2004. He made an apperance in the ABA in 2007 and was contending for the league title with the Wilmington Sea Dawgs. However, the team withdrew and joined a new league right before the playoffs. The Sea Dawgs didn’t get close to the championship. His big brother can sympathize.

Rodney Billups (Detroit Pistons, Summer ’05, ’06)
For what it’s worth, Rodney Billups seemed to have been worthy of a slot on the Pistons Summer League roster in 2005 (Reebok). A quick and smart point guard, Rodney averaged 10 and 6 the previous school year as the point guard at the University of Denver, a Division II school. He spent the next season in Latvia, he improved there, and the Pistons brought him back to summer league in 2006. He was taken in the 9th round of the ’06 D-League draft with the 99th pick. He later tried out to replace the late Chris Sandy in Finland, but was not signed, he had big shoes to fill.

John Millsap (Utah Jazz, Summer ’07)
The elder brother of 2nd-round super-sleeper Paul Millsap, John spent two years at the University of Texas-San Antonio. John will play alongside his younger brother Paul, who was nearly Rookie of the Year, in the Rocky Mountain Revue in Utah. His post-college hooping experience has been rather limited. Since finishing school in ’05, the elder Millsap has played briefly in China, the ABA and USBL. Although he averaged less than 10 points per game in the CBA this year, he managed an All-Star Game appearance for the first year (and now already defunct) Utah Eagles.

Daniel Artest (Sacramento Kings, Summer ’07)
Young Artest is probably the most interesting guy in this group. He passed through four high schools and three colleges, playing only two years of organized ball, claiming he preferred “streetball.” He allegedly played one year of high school ball at La Salle High School in Manhattan (Rod Strickland, God Shamgod and Ron Ron) and some JUCO ball at Southern Nevada in 2002-2003, where he averaged 15 points. Since turning pro he’s played one game in the USBL, one game in Germany and has had brief stints in the ABA and CBA. He’s rumored to be better than David Lee. Not.