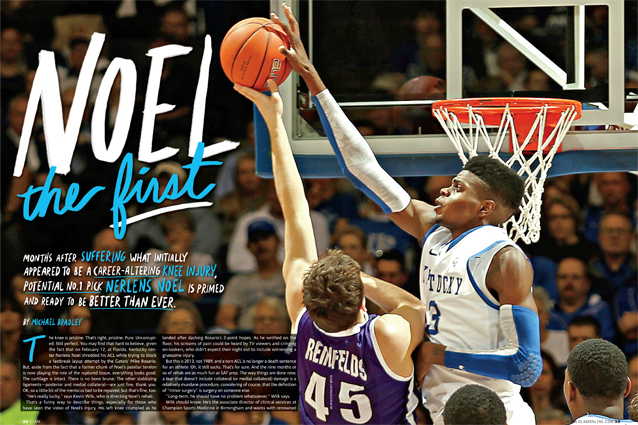 The knee is pristine. That’s right, pristine. Pure. Uncorrupted. Still perfect. You may find that hard to believe, given the fact that on February 12, at Florida, Kentucky center Nerlens Noel shredded his ACL while trying to block a fastbreak layup attempt by the Gators’ Mike Rosario. But, aside from the fact that a former chunk of Noel’s patellar tendon is now playing the role of the ruptured tissue, everything looks good. The cartilage is intact. There is no bone bruise. The other stabilizing  ligaments—posterior and medial collateral—are just fine, thank you. OK, so a little bit of the meniscus had to be repaired, but that’s fine, too.

That’s a funny way to describe things, especially for those who have seen the video of Noel’s injury. His left knee crumpled as he landed after dashing Rosario’s 2-point hopes. As he writhed on the floor, his screams of pain could be heard by TV viewers and cringing on-lookers, who didn’t expect their night out to include witnessing a gruesome injury.

But this is 2013, not 1989, and a torn ACL is no longer a death sentence for an athlete. Oh, it still sucks. That’s for sure. And the nine months or so of rehab are as much fun as SAT prep. The way things are done now, a tear that doesn’t include collateral (or medial collateral) damage is a relatively mundane procedure, considering of course, that the definition of “minor surgery” is surgery on someone else.

“Long-term, he should have no problem whatsoever,” Wilk says.

Wilk should know. He’s the associate director of clinical services at Champion Sports Medicine in Birmingham and works with renowned orthopedic surgeon Dr. James Andrews, who has seen more knees than LeBron James has seen double-teams. Wilk has worked with several pro athletes, including some NBA players. Now, he’s working with Noel, going through the stages of rehab and helping the top prospect in the 2013 NBA Draft get ready for action. He may not be in the office on Day One of next year’s NBA season, and we’re not sure he’ll be rocking the Kid ’n Play box cut, but he will be back, blocking shots and grabbing rebounds and chasing that dream.

“I told myself the day I got the bad news, that was the only day I could be down,” Noel says. “I prepared for the surgery and rehab and had to get to work.”

It’s an odd case, this one. Usually, the top pick in a given Draft lacks any kind of serious questions. OK, so Michael Olowokandi, who the Clippers chose first overall in ’98, was a 7-0 mystery, but at least he was healthy. Other than that, well, those were the old Clippers. The disaster Clippers.

In a Draft that lacks a lot of star power, Noel stands out. He’s the Big Prize, even with a still-developing offensive game. Even with less than a full season of college ball under his belt. He’s a 6-10 (7-2 with the haircut), 230-pounder with uncanny shot-blocking skills and a live body. He’s number one.

“It will bring a new dynamic that I can never recall at the top end of the Draft,” says an NBA executive. “Greg Oden had been hurt before, but he was playing at the end of the season he was drafted.”

Noel wasn’t. He was in a bulky brace. With a torn ACL. And a long rehab ahead of him.

Well, then, it’s time to make a little history.

So much had happened before Rosario got loose for that layup attempt. Noel had graduated a year early from high school, the better to get closer to his NBA dreams. He then took some summer school classes to make sure his books were settled. Then came that nastiness with the NCAA, which poked around in the summer, looking for trouble—and ultimately finding nothing that kept Noel from missing a minute of court time in Lexington.

It’s not like there was any pressure on Noel when he arrived at  Kentucky. All he had to do was replace Anthony Davis, MVP of the 2012 Final Four and top overall NBA Draft pick. At least he could match Davis’ signature unibrow with a signature tonsorial item of his own—the “Flat Top Gumby” cut, which was even adopted by teammate Ryan Harrow. Davis had led the cast of young Cats to the  National Title during his only year at UK, so it was considered a natural that Noel would do the same. Early on, it was pretty clear that wouldn’t happen. The Wildcats lost three of their first seven games, and while Noel’s numbers looked good enough (11.4 ppg, 9.4 rpg, 2.9 bpg) during that stretch, he admits it wasn’t an easy time.

“It was a pretty hard transition from high school to college,” he says. “It took a little time to be able to contribute to the team the way I wanted to. It takes time to find yourself. You have to stay focused.”

If there was one place a freshman could be comfortable in his development, even if it was happening in a setting more public than Keeping up with the Kardashians, it was Kentucky. Coach John Calipari practically has a post-graduate degree in getting freshmen on to the court and producing fast. Real fast. You don’t redshirt in Lexington. You’re a starter from the first day you show up on campus.

“It was a great experience,” Noel says of his time at UK. “Coach Cal taught me a lot on and off the court. I learned a lot of life lessons and how to love the work ethic.”

Even though Noel had some early inconsistency, by February he had lasered in on his mission. The Wildcats continued to stagger about, leading many to speculate whether they would have any success in the NCAA Tournament—if they even made the NCAA Tournament—but Noel was tearing it up. His 12 blocks in the late January win at Ole Miss were a remarkable achievement and stoked the NBA’s interest.

“I saw him at Ole Miss, and he took the game over the last 10 minutes,” the NBA exec says. “He had four fouls, and he was blocking everything.”

After swatting away the Rebs, Noel posted three straight double-doubles, including a 19-point, 14-rebound gem in a big overtime victory at Texas A&M. Although other freshmen like Kansas’ Ben McLemore and UNLV’s Anthony Bennett  were playing well and rising up the Draft charts, it was hard to imagine Noel’s not being the big Lottery prize.

Until the injury, that is. At that moment, Noel went from sure-fire top cat to a “yeah, but…” You know the guy.

“He’s got a lot of talent and potential, but he has that knee.”

“I would love to choose him first overall, but that injury raises questions.”

At first he hoped it was dislocated, although that can bring a whole different set of problems, like the dreaded bone bruise or some cartilage tearing. You don’t want that, Nerlens, believe us. “I prepared myself for the worst,” he says. He got it. Despite improved repair and rehab techniques, an ACL tear is still usually a nine-month proposition. Swelling must abate. Strength in the ligament graft must be re-established. Atrophied muscles must become strong again. Confidence must grow. The psychological angle has to be addressed.

ACL rehab actually runs counter to an elite athlete’s learned behaviors. He is taught that excellence comes from the extra rep, the next jumper and one more lap. When returning from a major knee reconstruction, more is not always better. “You can’t rush the body’s biology,” Wilk says.

Wilk relates ACL rehab to a basketball game. “There’s four quarters,” he says. Noel had his surgery March 12, and by late April, he was just completing the second quarter. The swelling was gone, and he had been moving and he had regained a lot of the muscle bulk that the injury and subsequent inactivity had taken from him. Next up was light running, a little bit of shooting and finally, clearance for full basketball work. The trouble, at least from the NBA’s standpoint, is that it’s unlikely Noel will be ready for actual game action when the season starts in the fall. Although it’s rather shortsighted to pass on a talented player because he might miss a month or two of his first season, the perception that the team has made a mistake by not having a ready-for-action pick—especially at number one—can often overrule logic. Noel is going to play professional ball, and he’s going to play it well. If the Lottery winner doesn’t pick him, it’s going to be a mistake.

“He’s the most talented player in a thin Draft,” a Western Conference talent evaluator says. “He has holes in his game, but his shot blocking, energy and defensive instincts will translate [to the NBA] immediately.”

Noel could have returned to Kentucky for his sophomore season and dazzled NBA scouts with his shot blocking and board work, while becoming more adept at the offensive end. Even though the UK are welcoming a recruiting class that includes nearly every McDonald’s All-American (or so it seems) Noel would certainly be the centerpiece of the unit.

But he decided that just one season, even though it was shortened by a month or so, was enough for him. Noel probably won’t be ready for opening night of his rookie year, but he has absolutely no doubts that he’ll be able to handle NBA life from the moment he is allowed to play without restrictions.

“It was a tough decision, but at the same time, I’m very confident in myself. I know I will make a strong comeback, and what made it easier was that Kevin told me I was making great strides and was ahead of where I should be.”

There are all sorts of roadblocks that could lie ahead in the rehab process, but Noel isn’t thinking about them. He isn’t worried about the “growth plate fracture” he suffered in the same leg as a high school sophomore. Remember, the knee is pristine. Pristine. The NBA executives like his game now and expect him to get better. Noel may be sporting a brace on his knee, and his situation is rare in Draft history, but the finish line lies ahead and Noel will do everything he must to cross it—and keep going.

“Regardless of what happens, whatever team drafts me is going to get 100 percent effort,” he says. “I always bring that to the court. I’m going to be the best leader I can be and block shots and rebound and score.

“Growing up, I dreamed about this. It’s amazing how close it’s getting. When it comes, it’s going to mean a lot to me and my family.”