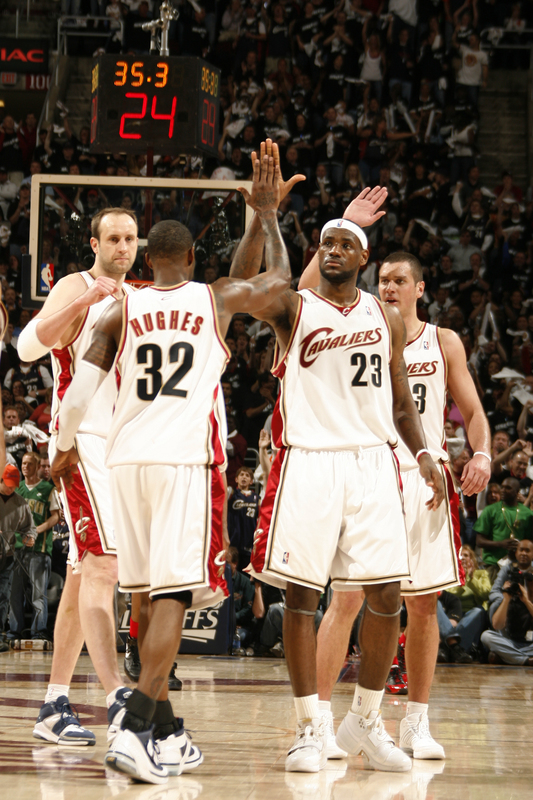 My thoughts on the series in general:

–This is a series that I have no interest in picking. The Nets boast the offensive firepower to beat the Cavs off the dribble-drive and kick, and the Cavs have the ability to pound the Nets on the boards. With the Jersey’s streaky nature and Cleveland’s propensity to go cold for long stretches, this is bound to be a series of runs. Which should make it interesting.

–People who have read Slamonline carefully enough over the years know that I pull for both of these teams. The Nets have been my team since the Mid 90’s and I spent 3 years covering the Cavs for this website during my college years. I even once wrote a column once calling these teams “my girlfriends.” So yes, my harem is squaring off, and honestly, I’m just happy one of them will make the Conference Finals. I’d prefer the Cavs against the Pistons or the Nets against the Bulls for the following matchup reasons:

The Cavs proved last year that they can slow it down and play Piston basketball, using good defense and maximum output from LeBron to stick with Detroit.

Because the Bulls don’t have a dominant low post scorer, it’s hard for them to exploit the Nets’ lack of interior presence, and errant jumpshots often lead to NJ fast breaks.

–Not that they’ll be matched up very often, but the Boston Snackbar-Sasha Pavlovic statistical comparison will be very interesting to keep an eye on. Both guys need to make open shots to maximize their team’s offensive firepower and build trust with their respective superstars.

–LeBron and co. have always struggled to win in Jersey. It will be very, very interesting to see if Bron and the Cavs can overcome this roadblock.

Some thoughts on Game 1.

–The Nets’ bench did a good job in from late in the first quarter into the second. I was especially pleased with Josh Boone, who did a good job diving to the hoop and keeping active.

–Does Vince Carter really think that his whining is going to win Steve Javie’s favor? As it is, he’s lucky it’s Javie’s job to try and stay impartial because otherwise he’d probably, like the rest of us, still be mad at Vince for jacking up that horrible 3 with the Nets down 1 with 30 seconds left in Game 6 against the Raptors. Ok, I’m not mad anymore, but you get the point.

–Good job by Mike Tirico and ABC, reporting on LeBron’s need to blow his nose. They really stayed all over that story.

–Good to know to know that Mikki Moore’s snake named “Peaches” bit him and that he had to dislodge a fang from his knuckle. Mikki Moore, ladies and gentlemen, taking gangsta to a whole ‘nother level.

–Through three quarters Kidd and Carter were a combined 8-25 yet the game was tied at 59.

–A big block from Sahsa Pavlovic down the stretch? Wow, all that preaching done by Mike Brown about defense being his team’s identity really is true.

–The Cavs pounded the offensive glass. Drew Gooden continues to come of age, going for 14 and 14. The only guys with respectable shooting nights (Gooden, Pavlovic, Jefferson, Nachbar) do so in support.

Jersey’s offense struggled mightily in the fourth quarter. Put it this way: they wouldn’t have been able to drive 20 miles south on I-71 and hit the side of a barn.

LeBron came up big down the stretch.

Vince came up wince. Kidd and Carter finish 9-34. Kidd, it seems, left his jumper in the first round. He’s going to need to get it back. J-SAP.

Jon Barry, he of the large nose, blessed genealogy and fiery temper made a good point after the game: “Cleveland’s best offense was their missed shots.” Yes, because they rebounded their bricks and turned them into points. They’ll need to take it to the rack more often in game 2, or Jersey will shoot better and probably steal that all important road game.