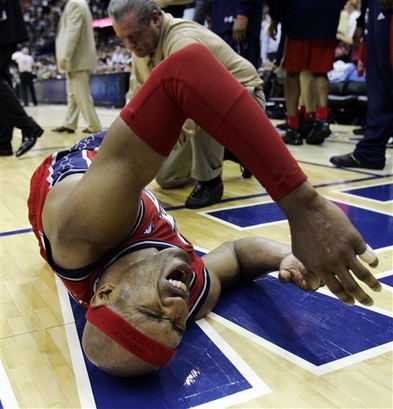 –They be wavin’ towels, yo. The crowd appears more boisterous than Game 1. That’s usually a given with a night game after a day game. It figures that a greater % of fans find it easier to drink during night games, in part because after work people often like to redirect their anger from work and apply it to their fandom.

–Opening star-studded Stanza: Vince misses a jumper, LeBron makes one off of a Gooden screen, and Vince comes back and hits a three.

–Aside from Jason Collins’ pathetic attempt at finishing a pick and roll with Carter—Gooden negates his feeble attempt—it’s a crisp first few minutes. Kidd is orchestrating. LeBron is finding Pavlovic for layups. Guys are hitting their open jumpers. It’s less bogged down than Game 1.

–I was about to write “Larry Hughes hasn’t forced a jumper” and then Hughes penetrated to the foul line and bricked one.

–Richard Jefferson is finding seams in the Cavs defense. He’s 3-3 and the Nets are up 14-9.

–The Cavs go to LeBron in the post and he hits a pretty spinning fadeaway. That may have not been high percentage, but given LeBron’s bulk advantage in the post over Jefferson, it wasn’t low percentage, either. 16-14 Nets.

–Commercial: Steven Schrippa, a.k.a. Bobby Bacala from the Sopranos, is a talking sock. Who said life after HBO would be tough?

–Stephanie Ready tells us that the Nets didn’t practice yesterday. They only watched game film. Interesting coaching decision by Lawrence Frank. Given their lack of time off between the first and second round, and the fact that they’ve looked fresh, it seems like the wise choice.

–LeBron takes it strong baseline and hits a nice reverse layup. Kevin Harlan, excited, makes the exact sound a man makes when he gets kicked in the nuts. I’m not kidding. It was dead on.

–Harlan: “Eric Snow: defense, toughness. He’s the whole package.” This “whole” package does not include a jump shot.

–The first quarter closes out with a much anticipated Marcus Williams-Daniel Gibson iso. Williams throws a floater off of the backboard, completely missing rim. 28-24 Nets at the end of 1.

–LeBron waltzes through the lane, gets an and-1 and high steps along the baseline after the foul. That was unnecessary. 15 yard penalty.

–Bobbie Gibson steals the ball from Williams and the play culminates with a Varejao dunk. 8-0 run for the Cavs, and they’re up 32-31.

–I’d like to take this moment to acknowledge the improvements in Antoine Wright’s midrange game. He used to be hesitant and scared to pull the trigger, but now he strokes it with confidence at least once every second quarter! But really, kudos to Wright for not developing the invincibility that seemed to define the first half of his season, and cooties to Daniel Gibson who CANNOT be legally old enough to have had the cootie shot. We need to check if he’s even old enough to play in the league. LeBron looks old enough to be his great grandfather’s best friend.

–Drew Gooden is owning the offensive glass right now. Frank responds by calling on Jason Collins. The Nets’ need for more size leads to Doug Collins backhandedly complimenting Jason Collins, inferring that his presence will help the Nets on the defensive glass. By the way, backhandedly might be the most gangsta adverb EVER.

–Vince Carter just did something right, slicing through the line and zipping a bullet pass to Mikki Moore for a layup.

–Carter just took on 4 Cavs in the paint by himself. At least he hit the tip in. Even when he’s being aggresive, he makes it look like he’s doing the wrong thing.

–Cleveland is up 9 in the offensive rebounding department. That’s sad. The Nets are shooting 54.5% from the floor yet they’re down 3. Let’s call on an old adage: Turnovers and second chance points, they’ll kill you. 48-45 Cavs at the half.

–Carter is noticeably moving with a limp.

–Two 3’s in a row for J-Kidd put the Nets up by 53-50. The Nets are 6-9 from 3 so far. After a Hughes runner, Collins kills the momentum with a two handed heave off of the side of the backboard from 6 feet out. The Nets atone by getting back out on the break; Kidd throws a sweet pass to a streaking Mikki Moore, who finishes with a dunk followed by that trademark menacing scream.

–LeBron has picked it up in the third. King James has 7 points in 5 minutes, including an open three and a dunk off of a steal.

–Richard Jefferson has woken up as well, getting to the rim consistently with ease. Bill Walton is a proud dad.

–Hey, there’s part-owner Usher in a “Witness” shirt. Good to see you, Rrrshr–can I buy a vowel? Dude should sing a ballad to the Cavs offense and call it “Nice and Slow.” It would be great because it’d work within the flow of the game because the Cavs need to slow the Nets down AND because it’d be the first time a pop star ever referred to a 1-4 set as “baby.”

–With a chance to put he Nets up three, Josh Boone bricks his first free throw and then airs his second one. LeBron bulls his way to the hoop on the next possession and makes two free throws. Carter, typically, bricks a fadeaway at the buzzer. 74-73 Cavs after 3.

–After Cleveland grabs its 7 billionth offensive rebound, Doug Collins makes a good point: The Nets are just running to the lane to try and grab rebounds. They’re not checking anybody. Nobody’s getting a body on the bigger Cavaliers. I’d go as far as to say that Anderson Varejao seems like an offensive rebounding Ferrari zig-zagging through a five lane highway by himself. However, it’s almost to be expected if you’re playing Boki Nachbar at power forward next to Jason Collins.

–Jason Kidd has 7 assists and 8 turnovers. When was the last time THAT happened?

–Carter leads Pavlovic into a Moore screen and Sasha basically shoves Mikki to the ground. Mikki points at him and talks shit to him before even getting up. More words are exchanged. Vince is getting into it. The intensity is palpable. Then Vince scores on a goaltend. He’s getting really into it. Not only does he look like he wants to cry, but he looks like he wants to keep playing with the “spoiled 8 year old that’s close to tears” look on face. So of course he forces a bad shot on Jersey’s next trip.

–The Nets go zone to try and stop LeBron. The zone leaves the weak side exposed and Pavlovic sneaks in to corral an offensive board and convert pretty finish. Carter comes back with a jumper. 93-89 Cavs.

–Carter takes a poorly selected fadeaway and lands with his left leg extended straight. Ouch. He’s down on the floor, squirming as trainer Tim Walsh rubs his cramped left calf. Vince gets a hot pack and a full Gatorade, according to Stephanie Ready. After a Hughes free throw, Vince returns to brick another lazy jumper. Have you learned anything tonight, Vince?

–LeBron goes to the basket and scores. 7 point game. That’s all she wrote. Doug Collins: “You can’t give a team 21 more shots at the basket and expect to win.” True.

Can LeBron conquer the swamp? For the sake of a long series, I hope not.