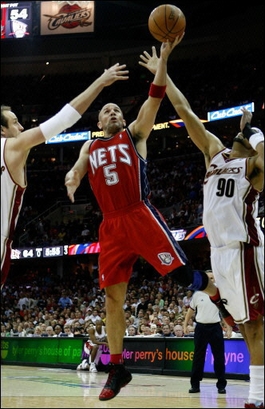 I only saw a few minutes of this game. I had a prior engagement that, up until yesterday afternoon, I had thought was right before the game, only to realize it was during the game.

Instead of writing a half-assed column pretending I know everything about Game 5—though I could have told you the “Live and let Larry” defense is golden: 3-17 (!)—I’m opening up the floor to the precious few of you that watched it.

I did leave a message with Ryan about maybe subbing for me on short notice (after all, dude did write the book on LeBron). Even though he has a family and is knee deep in crab apple covered Kentucky bluegrass, he obliged (sort of) earlier this morning.

Here’s what I got:

-The Eastern Conference is annoying.

-That was the single worst-played fourth quarter in the history of history.

-Reggie Miller & Dick Stockton are the NBA equivalent of Hoffman and Cruise in Rain Man. I’m not exactly sure how this analogy works, but trust me on it. It cannot be wrong.

-Sasha Pavlovic committing the exact same sort of unnecessarily hard, motivation-fueling foul on Mikki Moore that Mikki Moore committed on him 48 hours earlier is the best possible nutshell explanation of how flawed these two teams are.

-These two teams are really flawed.

-Saying Donyell Marshall did not shoot very well last night is roughly equivalent to saying the Bush administration has been somewhat politically divisive.

-When people talk about momentum killers, they usually imply something Team A does to kill Team B’s momentum. But not enough is said about players who kill their OWN team’s momentum. A prime example of this would be Eric Snow, whose inability to make a wide-open 15-foot jumper — or even come close to making this shot — is the sort of thing my grandkids will tell their grandkids about. Remarkable.

-LeBron’s knee is fine. LeBron will play better in Game 6. I think the Cavs will win Game 6. But I won’t be surprised if they don’t. -In the overall scope of these playoffs, this series will not matter at all.

-I have a lot of new friends in Kentucky.

Thanks, Ryan. (After typing “Thanks Ryan”, I know now what Lang felt like for 7 years before Slamonline changed up.)

I should be at game 6 so rest easy fellow Eastern conference supporters.

Until then, add your comments below and anything particularly striking will be added to the post this evening in honor of your awesomeness.