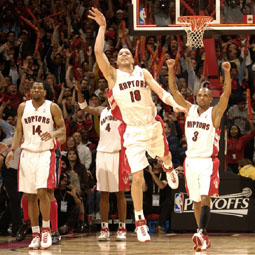 My plan was to leave Buffalo and be back in NYC in time to relax, watch the TNT double-header and rest up for a few morning errands before I headed to SLAM offices for the day.  But that type of responsible scheduling never works for me.  Instead, I left Buffalo around 4 p.m., forcing me to pullover around Syracuse so I could check the Nets-Raptors game, a game that I predicted would be the last for the series, at a bar.  The dining options were typical (Hooters, Uno’s, Johnny Rockets), I chose Ruby Tuesday’s.  By the time they switched the television to TNT, Toronto was already up 20-8.  Making matters worse, the rubes working the TV couldn’t get the subtitles to work, so I had no idea what Marv and Kerr were saying throughout the game.  What follows is how I imagined Marv and Kerr called the game (a pretty entertaining joint, might I add):

(skipping to the 2nd Quarter)

Marv (10:17): Nachbar, plus-one!  The Nets have now gone on a 7-0 run with Chris Bosh sitting on the bench with two fouls.  The score is now 33-20.
Steve: The Raptors wanna be careful here, Marv.  Giving up this lead before the half would be incredibly deflating and I don’t know if Toronto, after getting blown out twice in a row, is all that confident to begin with.  They aren’t that kind of battle-tested team.

Marv (3:03): Mikki Moore has just been hit with a technical foul.
Steve:  I know this is totally unrelated, Marv, but doesn’t Moore look exactly like the late Proof from D-12?
Marv: Not all black people look alike, Steve.  However, Bosh does almost exactly resemble a raptor. It’s uncanny!
Steve: Too bad he’s been playing like a kitten.

Marv (7:16): Calderon with his third bucket in a row to push the Raptors lead back to 15.
Steve: The Raptors are obviously hoping for good news regarding TJ and his stinger, wouldn’t want the young guy to suffer through any more injuries.  But, perhaps this was a boon, seeing as how Calderon is having his way with the Nets right now.
Marv: That was horrifically insensitive and small of you, Steve.
Steve: I’m just saying that having Calderon on the floor has been huge for the Raptors.  Makes you think Mitchell might think about playing him 30-35 for the rest of the series…IF there is a rest of this series.
Marv: Speaking of which, Steve, in Bosh’s absence, Bargnani has put together an incredible half, as well.

Marv (10:30): Vince Carter misses a transition three.
Steve: He was making those in New Jersey, Marv.

Marv (5:56): Chris Bosh picks up his fourth foul!  He’s incensed as he heads to the bench.
Steve: He better watch it, Marv.  Doesn’t wanna pick up a tech.  And it’s his fault for recklessly jumping in the air to contest the drive.  He should have been more careful, playing with three fouls in a game where the refs have shown they might be a little whistle-happy going his way.

Marv (4:11): Carter — And-1!  The Nets have cut Toronto’s lead down to 9.
Steve: Let’s see if the young Raptors tighten up and start playing stiff, maybe even a little scared, Marv.  You had to think New Jersey was going to make a serious run, they’re definitely capable.  The way Toronto answers, will say…
Marv: Mo Pete for three! And it’s back up to 12.
Steve: Somewhere, Mateen Cleaves is tap-dancing and smiling really wide, because Mo Pete has been all hustle, all game and he’s been aggressive offensively, too.  If he keeps playing this way, it makes Joey Graham’s ineptitude easier to swallow.

4th Quarter
Marv (8:55) Calderon by Kidd for the reverse and that puts Toronto back up 14, 85-71.  That’s six straight points for Calderon!
Steve: Marv, New Jersey is going to have to find a way to solve what is looking like a Calderon-problem.  This is by far his best game of the series, but he’s been able to get his shot and force action pretty consistently.  The problem with this game is that Kidd isn’t making him work as hard on the defensive end.  If Calderon is going to make Kidd look like an old man on this end, then Kidd has to go down on his end and make Calderon look like a little Kidd.  Seems like the Nets should be feeding it to Jason in the post and running their offense through that option.

Marv (5:35): Jefferson with the floater and it’s Toronto only up two, 87-85.  New Jersey has clawed its way back, Steve.
Steve: Marv, that’s the second time Kidd has gotten Jefferson the ball in the paint off the back pick and it all stems from the Raptors needing to double Kidd in the post to help out Calderon.  Kidd is finally responding in kind.

Marv (1:00): And Bargnani is called for the charge.  Boy, Bargnani has struggled in the second-half, hasn’t he Steve?
Steve: He has.  It’s just too bad that in a situation like that — late in the game, a big lead having vanished — that Toronto couldn’t give it to Bosh on the low-block, clear out and let their franchise player protect the house.

Marv (:27): Vince Carter for three! And New Jersey has cut the Raptors lead to one, 95-94.  Big shot from Vince Carter!
Steve: He’s got 30, Marv.  So much for the notion of the Toronto fans getting him off his game.

Marv (:14): And Bosh misses the second, Kidd the rebound, down the court, to Carter, Carter fumbles…gets it to Nachbar on the wing for the win?! It’s no good!  And the Raptors hold on to win 98-96.  Back to Ernie, Kenny and Chuck in TNT Studios.

Ernie: Real quick before we head to Dallas, Chuck, what do you think about the Raptors avoiding elimination tonight?
Chuck: It don’t matter what I think, because they ‘gon get they butts kicked on Friday in New Jersey anyways.