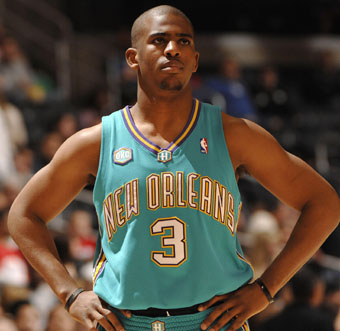 An oft-used slang term in New Orleans, “You already know!” is a weird enough phrase when it comes from an anonymous rapper on public access TV, who, really, hardly anyone “already knows.” “Already know” what? That you’re selling your mixtape and have many gold teeth? Yeah, I already knew, true enough. But there’s a real irony to “You already know!” being slung around in a city where anything we already knew is under serious duress and questioning every damn day.

The New Orleans Hornets are another thing we don’t “already know” about down here. They were gone for all but 6 games last year, selling out the arena in OKC, and their planned 5 of CP3–Peja–DMase–David West–Tyson was on the court together for all of 121 minutes in 2006-07. Last year’s Hornets were arguably the most injury-plagued team in the L. At one point or another, all 5 starters (as well as high-priced sixth man Bobby Jackson) spent time on injured reserve. Going into this season, we know about the parts of this team, but we still haven’t seen them as a unit.

Which gives us reason for hope, and hope, my friends, is worth quite a few barrels of oil in our fair city these days. This year isn’t quite make-or-break for the team in New Orleans, but a quality season is crucial, on the court and off. A young, hardworking squad needs to know its getting somewhere, isn’t just busting ass for Lord B in vain. Similarly, the city needs some wins. The bittersweet tinge to the Saints rapid rise and present descent is all the stronger because sports—wins and losses—provide the only clear cut answers we get down here. With the return of the ‘Aints and the paper bag headwear, people are ripe for some diversionary good news. Perhaps the lesson of Reggie Bush and Co. is that we shouldn’t pin our hopes on something as abstract as games, but we need something, anything, to show us that the world isn’t all self-promoting, image-destroying mayors, bumbling district attorneys, untrustworthy cops, an absent federal government, and the short road to City of God status. Yeah, some of us are working every day to prevent that, but perhaps the next bright spot will arrive in the teal wrapped form of a young, hardnosed team led by a dynamic leader on the verge of greatness.

Because Chris Paul is real. Not just the speed and the handle and the natural PG flow, but the competitiveness, the desire to run the team, to do the star’s work, to let his brother gamble with Lang, along with the charisma and humbleness–he’s got all that. There’s probably someone I’m not thinking of, but if you set out to design a young guy worthy of the dual tasks of field general & public ambassador, it’d be hard to beat CP3.

So the key is, who will follow him? PF David West, the team’s leading scorer, looked great when he played last year, as did the team and CP3. If West takes another leap, to say the Boozer level, the Hornets have a real foundation.

Did you know Tyson Chandler, Olympian and sometimes Mohawk don, is only 25? Yup, and I think the summer with the King, Kidd, & them was exactly what he needed. Chandler plays a lot like a young Marcus Camby but, because of the weird start with the Bulls and a certain awkwardness probably due to extreme youth, he got overlooked or mislabeled as a bust until the last two years, when he finished 2nd in rebounds and showed up nightly with defense and tip-ins. Just like that, he’s on the national team, which should give him the confidence edge he needs to get to the All-Star level.

CP3-DWest-Tyson form the nucleus, with enough promise to warrant some patience. Unfortunately, we’re desperate for results now. Peja is obviously the X-factor, though it’s a shame that you’re $60 mil free agent splash from a year ago is still an X-factor. I wasn’t that into the signing, even less so when Peja missed all but 13 games, going down to back surgery. After a summer rehabbing in Greece, Peja says he’s feeling better. Is he feeling 2001-2004, almost-MVP-let-C-Webb-heal better? I’d say a yes would mean playoffs. I’d say yes to GW approving immediate funding for wetland restoration, too, but I’m still waiting. We’ll see.

Mo-Pete was this year’s big pick-up, and I am down for some Mo-Pete. He’s a vet with gas in the tank, a shooter, and can fit in with the Hornets’ defensive toughness. The Hornets essentially trade in Desmond Mason’s athleticism for Mo-Pete’s shooting. Can he put up 15 ppg? We’ll see. We’ll also see recent addition Melvin Ely. Who is Melvin Ely? NBA Champion, student of Jerry Tarkanian…sign of a great city’s recovery? We must dream.

Bobby Jackson, eh, he is becoming quite the distinguished gentleman, but it remains to be seen if he will stay healthy enough to back-up/play effectively with CP3 for an extended stretches. Jannero Pargo, my girl really likes him. Why can’t I just get over that? Mason is gone, which could hurt, as he did a lot of little things, was great on the break, and brought it every night. Rasual Butler, he is like D-Mase light, you say? Yeah, sorta. Young Hilton Armstrong impressed people in summer league. Devin Brown is gone, and someone will need to pick up the slack, strange as it sounds, for Devin Brown’s streaky scoring. There’s also minor talk of former Hornet and Louisiana native PJ Brown returning to the team, which would continue the nice balance of young & vet, recently weighted to the latter with the reacquisition of David Wesley, who rocked the suit and towel through last year’s Lebronapalooza. One more fact: Ryan Bowen: in Hornets camp.

1st Round pick Julian Wright is a bright, promising question mark. The Hornets lucked out when he fell to 13, though Hornets247.com’s Ron Hitley and I were a bit surprised (and fairly drunk on dollar beers) to hear Lord Byron at the draft party, when prompted by the question, “Who does Julian remind you of?” (“Birdman!” I hollered), immediately respond: “Magic Johnson.” Roll with that hype, B-Scott! Cross those arms!

About those dollar beers: apparently no one notified the women working the concession stands that this was a special evening, an evening where everything cost a buck. This left them saying, “Nope, not tonight,” causing many a man to wander the arena’s halls, pointing at the TV monitors and fliers advertising dollar beers, various looks of shock and outrage on their thirsty faces. Ron and I alerted security to this injustice, and the abominable situation was rectified and the beer, it did flow.

Point being: the organization doesn’t have the greatest managerial history and now it’s trying to reconnect with fans in the world capital of bad managerial history. I hope those histories change, rather than combine, that the Hornets defy the flourishing set-up/promise/stall/disappointment trend and instead do things the right way. Whatever you hear on the news, know that people in New Orleans are strong and fighting. Right about now, though, we could really use a winner.

But informed realism is the bedrock of fruitful dreams, so what’s really gonna happen down here? From all recent evidence, we know this team will play hard for 48 minutes. We know they’ll play in New Orleans full-time, in front of a crowd that appreciates heart and talent. We’re pretty confident that the young nucleus of Paul, West, and Chandler will take the next step towards consistent quality. You can bet your Road Home check that Byron Scott will maintain that cool, older brother demeanor. Team defense and a good fast break should be strengths. The West is a b–ch and the Hornets will need to sneak punch (what’s up, Khalid) some teams.

After these relatively sure facts, we have ifs and hopes, familiar phantoms in today’s Crescent City. Hopefully, the vets stay healthy and deliver on their reputations and contracts. If Peja plays 70 games, puts up 18-20 per; if B-Jax and the young guys give them some energy off the bench; if D-West or Tyson make serious leaps and join or almost join CP3 in the All-Star game (held in New Orleans this year); if Melvin Ely pimps the derby like a mobster…uh, if Melvin can spell Tyson and get rebounds…

And I hope people show up and support this team and that the team gives it right back to the people. Last year taught us that, with all those young legs and a few interchangeable parts, the Hornets can make some noise. The best possible scenario would be if fans rode with them all year, the hardcore picking up the casual as the season progresses, ending a playoff berth in return for the faith. Obviously, that means a team like Golden State or the Lakers needs to drop out of the playoff picture. If they were still in the East, I’d guarantee a playoff berth. In the West…you know what, I’m guaranteeing it: the Hornets are going to the playoffs! Cue Bono and Green Day! Slap Ray Nagin! Change the slogan to “We Fresh!” Call up Mannie! Defend New Orleans! Keep up the continued federal support and sympathetic national attention span….