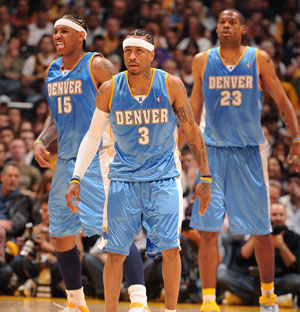 Many of you know that in addition to scouring the college game in detail, I have a slight affinity for the Denver Nuggets of the NBA. They have been my local, home-side since my junior high days, but in the past five years, my perception has changed. It has changed from one of a kid that regularly snuck into the locker rooms at McNichols Sports Arena to that of a semi-hardened quasi-beat writer. I have been given the unbelievable opportunity to associate myself with SLAM Magazine; able to attend Nugget games at will. Now, however, I feel a bit different about the once-lovable (and now universally criticized) Nug Pups. I see them through a different set of glasses, literally and figuratively.

The professional demand to stay calm and objective during live games and later at the keyboard, has allowed me some separation of sorts. I still want to see them succeed (for more than just the “story,”) but I can’t say the same about the Denver Broncos or the Colorado Avalanche. Like most of the diehard Bronco fans around the country, I have trouble being objective when discussing that football team. The Nuggets, however, I have on lockdown. Nothing can escape my investigative gaze, and here today I intend to write out a prescription for what currently ails the entire franchise. To be honest, had I penned these thoughts a month ago, this might have looked a lot different. But that disastrous Laker series was like mutha-f*ckin’, Coast, the Eye-Opener and I got the wrecking ball at my disposal and soap in my eyes.

This coaching change was not one that I endorsed before the start of the postseason. I’ve always like George Karl as a coach in Denver. I admire and respect what he has accomplished as a coach and endured as a man and father. His style was something that seemed to be a good fit, especially the way this team took to him during that now famous late-season run in 2004 where they won 32 of their last 40 to sneak into the playoffs. I commend the Coach for what he has done for the franchise, as he had led them to the playoffs in each season (something that only the Spurs can also claim over the past five years) in the ultra-competitive Western Conference. But he lost me as of late.

NBA Coaches have a few in-game responsibilities. Mainly, substitution patterns (which can be largely dictated by one of the billion assistant coaches now on each bench), calling time-outs to squash opponent’s runs (see above), but most importantly, working the referees. If calls aren’t going fairly early in a game, it is the coach’s duty to yell at the refs and even take a technical if need be. In most cases involving veteran coaches (which would surely include the 870-win Karl) the calls tend to slide back towards that particular coach over the course of time. Puffing out your double-breasted chest keeps the players happy and quiet, too. Their coach has their back and they don’t have to bitch at the refs. We all know that players (minus a few) can’t “work a ref,” and ultimately start getting calls.

During every game in the Laker series, calls did not seem to go the Nuggets’ way, early on. Karl kept silent, instead opting to work his lozenges and lean on the scorer’s table. The whistles never changed, further infuriating the Nugget faithful, but mostly the players, many of whom showed open disdain during games towards their coach’s indifference. Each and every game included second-half technical fouls involving a disgruntled Nugget, with the team racking up eight total (all second half) in just four games. Allen Iverson had four by himself, taking the brunt of the abuse that should have been shouldered by Karl, who never once drew the ire of a referee for the entire series. (Side note: The night I started this piece, I was watching Game 2 of the LA/Utah series. Jazz Coach Jerry Sloan took a tech just 8 minutes into the game, which immediately flung me into a diatribe that my half-asleep wife was not expecting.)

It appears that Karl will return next season, but I just feel that this group would be better served being coached by the old “Furious” George. (I would have approved of Avery, who does have Denver ties. I used to see him at Parent-Teacher Conference Night.) The players need to be held accountable for their missteps on and off the court, and that just hasn’t been the case. Guys give up easy baskets with no fear of reprisal from their boss. San Antonio’s mercurial point guard, Tony Parker, on the other hand, gets his head chewed-off on a regular basis and he is an All-Star with multiple rings. To be honest, I want Karl to stay, but it might be too late. He has already made a public devotion towards heightened discipline next season; making guys “toe the line,” but will the young stars listen?

The need for these major changes goes beyond wins and losses, though. It is about culture, identity, and accountability. The personnel moves made by the recent two-headed brain-trust have been innovative and somewhat shrewd (re-signed Melo, traded for JR Smith and Allen Iverson), but the real issue has nothing to do with “team assemblage.” The way that this organization does internal business would make a man like Tom Coughlin burst every ocular blood vessel. Karl’s aforementioned on-the-court disciplinary apathy, however, is actually a by-product of the message coming from the front office.

That is not just a recent issue, though. It goes back to the Kiki Vandeweghe days. Word around those who know is that there has always existed a power struggle between what Karl WANTS to get from his players and those same players’ propensity for “running upstairs” whenever things got rough. I have also heard the story on many occasions about how “showing up on time” doesn’t always pertain. Players show up to chartered flights 15-30 minutes late and nothing happens. In the “(g)olden” days, those tardy would be surely left on an empty tarmac with a scribbled note reading, “Find your own damn way.”

STEP TWO: Focus on what you have.

They must take the necessary steps to ensure that young players, like Linas Kleiza and JR Smith remain in Nugget jerseys. Focus on the young talent. Carmelo, Nene, LK, and JR are the four main pieces that must be retained. None are over the age of 25 and all are still feeling their way out in the NBA world. When healthy, Nene brings an interior presence that has been sorely missed on this team (don’t kid yourself about Camby’s complete defensive package.) He can score in the post, knock down spot-up jumpers, and makes live tough for the opposing centers. Tim Duncan and Shaquille O’Neal are both on record, attesting to the physical punishment that the Brazilian inflicts down in t he trenches. Trading Carmelo Anthony would be professional suicide, as the kid is still one of the league’s best players and by the end of this summer, will be again, placed among the world’s elite (remember, he was Team USA’s best PLAYER in Vegas last summer.)

Smith is a restricted free-agent, and his late-season play and UNBELIEVABLE “upside,” make him surely attractive to potential suitors. (My sources tell me that the Knicks have wanted to unload the Brinks truck for some time.) Because of the eventual demand, however, money must be freed-up through trades to ensure that there will still be a little left in the bank for the Jersey native. Nene and Melo are locked up through ’10-11 (each have options for ’11-12) and Kleiza’s option for ‘09-10 has already been picked up.

These guys are two of the most admirable men in the business, and this team surely needs more character guys, but they should be traded, hopefully for both draft picks and a couple veteran glue-guys/long range-shooters and a maybe a point guard. AI is a marvel to watch, but with a player like Carmelo, a teammate can’t dominate the ball, unless he is a pass-first type of player. When Iverson goes through a couple consecutive offensive series where he controls possession, it invariably leads to Melo doing the same (kinda the “hey, now it’s my turn to dribble” theory.) When Iverson looks predominately for his teammates, the unselfishness becomes contagious.

Trades that would be made for these two players would have to include draft picks. A young point-guard would be a nice addition to go alongside Chucky Atkins who is already on the tab for 3.4 for next year. (I submit the “trade these guys to Chicago and somehow get the top pick and draft Derrick Rose” argument right now.)

Free agents, Anthony Carter and Yakhouba Diawara should both be allowed to walk but I strongly encourage the Nuggets make a reasonable offer to fellow free-agent Eduardo Najera.

Kenyon Martin ain’t going nowhere, and if Steven Hunter can be packaged with either Camby or Iverson, that would be both fine and dandy.

CONCLUSION: There you have it, pretty simple, if not a tad drastic. Five years ago, if I had written a truck-load of words about whether the Nuggets should be keeping then head Jeff Bzdelik, resigning Birdman, or whether or not to start Skita, about a dozen of you might have had an opinion. Something tells me that might be different now…..